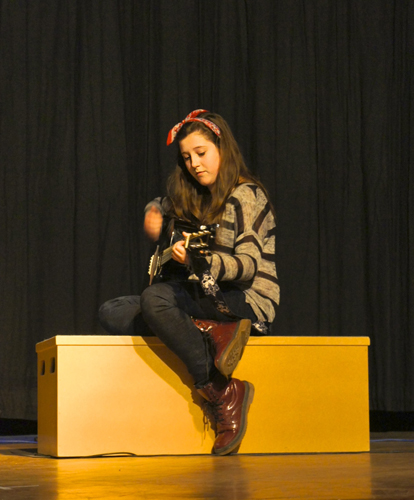 Last night Gillotts School staged their ‘Superstar’ talent show which showcased nine acts with a mixture of singing and playing music.  Students from Itzamna House organised the event to raise money for the Helen and Douglas charity. Judges for the evening were Alfie Hay; founder of the Henley Youth Festival, Carole Decker; lead singer of T’Pau, and Joe Henwood; a very talented young saxphonist and ex-pupil of Gillotts.  The evening was hosted by pupils Jo Lunnon, Charly Ayers and Erin Bradley.  Host Jo added his own comedy performance to the evening in between the acts.

The evening started with a lovely duet rendition of Emeli Sande’s, ‘Read All About It’ by Darcy Simms and Sophie Wermann.  Other highlights included Tania McIntosh playing the piano, Jade Allum accompanied by Bella Bull on guitar singing Jade’s original song which she’d only written the day before.  The last act of the evening was Lissy Smith who also wrote her own song ‘Come Lay Next to Me’ and played the piano.  Cameron Jones introduced his act by saying “His friends had entered him and he wasn’t that good.” His rendition of ‘Get Down On It’ was ‘original’ and the audience loved it.

Deputy Mayor, Stefan Gawrysiak was invited by Jake Clarke one of the student organisers to come along in the interval to talk about the event Music on the Meadows which will be taking place on Saturday 1 June from 2pm and the winner from tonight’s competition would be invited to perform at this new festival.

Carole Decker before presenting the prizes commented, “What great talent there is at Gillotts”.  She presented the prizes to Tania McIntosh for 3rd place, Lissy Smith for 2nd place and to the winners Jade Allum and Bella Bull.  As well as being invited to play at the Music on the Meadows the winners have been invited to play at the Henley Youth Festival Saturday Gala on Saturday 16 March.

Claire Edwards, Gillotts Music Teacher commented afterwards, “The students put in a lot of effort to make this event happen and I’m really pleased to confirm that the event raised over £500 for the Helen & Douglas charity.”