With so much going on in this year’s Henley Youth Festival one event took place even before the Festival began on Friday. 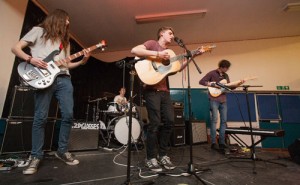 On Friday around 150 young people packed into the Youth Centre for HYF Gig Night. This event is open only to students in Year 9 and above and bands

included members aged from 15 – 18. Bands appearing including 2D Glasses, (TBC), were able to  use a professional drum kit provided by DrumWright and a sound system kindly provided by Oli Baldwin and the Henley College. Performing arts co-ordinator Lucie Henwood (pictured above with Gig Night organiser Jo Weavers) said, “It was a great night. Lots of bands, an enthusiastic audience and a really good vibe.”

Last weekend 15 older students took part in a two day sculpture workshop at Henley Youth Centre with professional artist Peter Rush. They created pieces from wire, plastic and paper, some of which will be exhibited at the HYF Art Exhibition starting on 15th March. 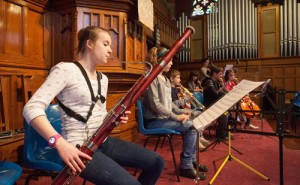 and ABRSM Examiner Chris Walker. As well as practicing their own solo performances the young musicians prepared a performance of Elgar’s Pomp & Circumstance March No 1 (Land of Hope & Glory) to be played at the end of Proms evening.  Chris Walker said   ‘We are very lucky in Henley to have such a thriving Festival that gives so many different opportunities to the youngsters of this community. Long may it continue!’ 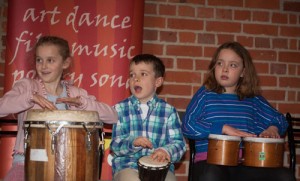 On Sunday the very first Junior Proms took place at a new venue, Bix Manor. The event was formally called MusicMakers and had been held at the River & Rowing Museum and the Eyot Centre but Bix Manor stepped in to offer a new home this year when these venues were not available. Around 100 young musicians of primary school aged children performed in front of an audience of family and friends. Playing solo or in groups from Henley Music School and Trinity Drummers young people played a huge range of instruments including piano, violin, bassoon, recorder, drums, p-bone and a harp. Young singers joined the musicians singing classical pieces and songs from musicals. Specialist advisors including Fiona Hedges – an Oxford based cellist and music teacher, and Elinor Carter – a professional mezzo-soprano and singing teacher based in Wallingford – watched all the performances and their constructive feedback will be sent on to each young person to help them with future performances. Co-organiser Kate Swinburne-Johnson said , “ Junior Proms is a great opportunity to perform in a relaxed environment. It’s about enjoying your music and building your confidence.  Bix Manor is a great new venue for us – probably the first HYF venue with a warm open fire and sofas!”

Bellboating was due to take place at The Eyot Centre on Saturday but had to be postponed as the river was too high for it to take place safely. It will now be held on Sunday 5 May 1-5pm. HYF continues this week with schools workshops, open workshops including ukulele, taekwondo and fencing, performing arts events at the Kenton and HEDFAS sponsored arts events at the weekend.