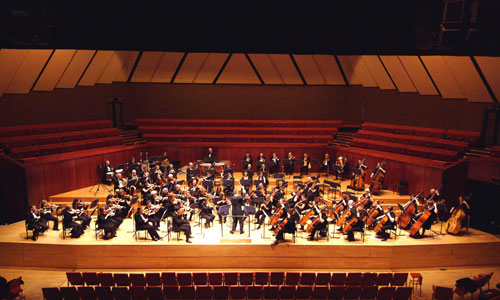 The efforts of those who braved the bitter cold last Sunday evening in support of Henley Symphony Orchestra’s spring (!) concert at Reading’s Hexagon were well rewarded.

Lush orchestration doesn’t get much better than Wagner, Elgar and Brahms, and we had it in abundance, as well as in masterly style, thanks to Music Director Ian Brown’s grasp of shape and texture. The three excerpts from Wagner’s The Mastersingers of Nuremberg – Prelude, Dance of the Apprentices and Entry of the Mastersingers – offered a short taster of the opera. The Prelude was sensitively played, its gently undulating themes interspersed with nicely shaped horn solos and quartets. A spirited canter through the Dance led on to the familiar territory of the Mastersingers overture, ending our brief operatic encounter with panache.

This augured well for the appearance of Colin Carr, an Oxfordshire resident with an enviable global CV, in Elgar’s Concerto for Cello and Orchestra in E minor. Fully expecting yet another derivative of Du Pré’s legendary 1960 performance, we found ourselves totally wrong-footed by something refreshingly different: subtle rubatos that gave new insights; contemplation in lieu of declaration; unashamed sweetness; soul-searching sensitivity. At speed there was deliberation and projection, yet always control, while Carr’s judicious use of vibrato was an entire master class in itself. The poignant last slow passage, preceding the fourth movement’s finale, was simply magical, a telling encapsulation of all that was admirable about his playing and of an interpretation made entirely his own. The orchestra played its part well, offering sympathetic support throughout. It was a totally captivating, fulfilling experience.

The second half brought the HSO back to the platform for Brahms’s sumptuous ‘pastoral’ Symphony No 2 in D.  Horns, cellos, flutes and oboes were central to its first movement, the six desks of cellos bolstered by six double basses and the magnificent presence of Colin Carr and son sitting in at the back. The rich roundness of the horns, cellos and basses was the movement’s aural signature while its slow-burning intensity was maintained by all sections of the orchestra, the violins in particular fighting for prominence often from high in the register. Again, the deep timbre of the cellos, complemented by some fine horn and woodwind playing, pervaded the gorgeous second movement. Lively and quirky, the third movement was introduced confidently by the principal oboe and supported by the remaining woodwind, the subject returning time and again to drive home the message. A pulsating tempo gave momentum to the boisterous fourth movement, full of Brahms’s favoured cross-phrasing and syncopation, bringing the evening’s music to an exultant close with the full force of HSO’s brass. The multiple curtain calls were fully deserved.

Interested in joining the HSO? If so, go to www.henleysymphonyorchestra.co.uk. Not to be missed is their annual summer concert in the grounds of Shiplake College on Sunday 23rd June, with Shakespeare as its leitmotif.

Henley to Twin with the Town of Bled, Slovenia
Scroll to top