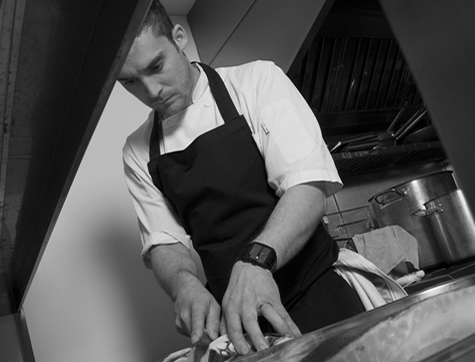 Shaun Dickens at the Boathouse restaurant recently opened at the old chandlery at Hobbs Boatyard, on the corner of Station Road.

Shaun Dickens is an award winning chef who has trained at some of the finest restaurants in the world, working closely with chefs of international repute including Raymond Blanc. He started his career in the 2 Michelin starred Le Manoir aux Quat’ Saisons before moving to New York to work at Per se, a 3 Michelin starred restaurant ranked 6th best restaurant in the world. He then returned to England in 2009 and joined L’Ortolan in Shinfield for two years before moving to Fallowfields as head chef and farm manager.

Shaun who lived in Henley a few years ago thought that it would be a great place to open his first restaurant.  He says, “I think we have the perfect location for a new fine dining experience.”  He’s really passionate about striving to serve the best quality food together with fantastic service.   He also knows that he will need to tweak things from the lessons he learns along the way.

The restaurant lunch menu offers two courses for £17.95 with three choices for each course and includes a confit of salmon as a starter and pan fried bream for a main.  The a la carte dinner

menu includes peanut crusted tuna for a starter and Shaun’s current favourite main dish he likes to cook; pan fried sea bass, served with a red pepper lasagne and red pepper chutney which he says both complement the light delicate flavour of this quite meaty fish.  The restaurant will also be offering a light menu of sandwiches, homemade scones, biscuits and cakes on its fantastic river deck during the summer months.

Shaun believes his ingredients are sourced from the very best farmers and growers and he loves nothing more than to put on his wellies and go out and see his suppliers who are passionate about their products.  He uses local produce whenever possible and has just appointed Lawlor’s Bakery of Henley to bake the bread for the restaurant.

When asked what he likes to eat at home with his wife Gemma on his rare days off, his favourite meal is chilli served with potato wedges and sour cream.

Shaun’s funniest moments in his career have been when he was the farm manager at Fallowfields when he and his team had to round up the pigs for slaughter.  He described it as a scene out of Rocky with everyone ending up on their backs covered in mud.

Shaun knows that if the restaurant is to succeed in Henley he needs the people of Henley to be his guests all year round and not just rely on the summer visitors to the Henley events.  This is why he has personally delivered invitations to 85 special guests for the restaurant launch tonight.  He has already been pleased with the generous support from local businesses and people in Henley and he hopes to build on this in the future by getting involved in community events.

Shaun would like to put Shaun Dickens at the Boathouse on the restaurant map for Henley like The Orangery Restaurant at Danesfield House and the Vanilla Pod are for Marlow.

The Henley Herald would like to wish Shaun every success with the new restaurant.