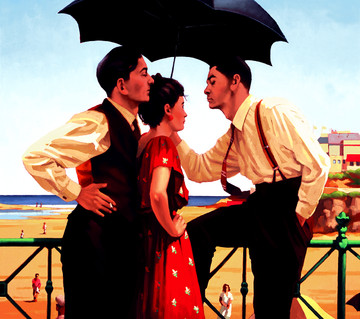 Jack’s Gallery at 36 Hart Street is owned by Jack Free of The Art Consultancy.  Jack opened the gallery in Henley last September in the shop next door, originally just for six months.  When the lease came up for renewal recently he decided to stay in Henley and move to the shop next door which had been vacated by Horizon Gallery.

The gallery is named after two Jacks, the owner and the gallery’s featured artist Jack Vettriano.  Jack Vettriano was born in Fife, Scotland, in 1951 and left school at sixteen to become an apprentice mining engineer in the Scottish coal- fields. On his twenty-first birthday he was given a set of watercolour paints and from then on he spent much of his spare time teaching himself to paint. His breakthrough came in 1989 when two of his paintings were exhibited at the Royal Scottish Academy’s annual show and sold on the first

day. The following year three of his paintings were exhibited at the Royal Academy Summer Exhibition in London to an equally rapturous reception. By then he had given up his job in order to paint full time, and demand for his work has since grown rapidly, with sell-out exhibitions in Edinburgh, London, Hong Kong and New York.

Jack Free says, “Vettriano’s paintings are much sought after and even the signed limited editions which I sell are collectible and a very good investment particularly once they sell out as they are not reprinted.”

Jack, who lives near Henley, has been in the art business for 25 years and has a really lovely jovial personality although when we asked him what his favourite joke was he said, “I can’t tell jokes as I can never remember the punch lines”.  He describes himself as ‘just a normal bloke who loves art.‘

The Art Consultancy run exhibitions at Hurley and Bray village halls throughout the year and for the first time this weekend – Saturday 20 and Sunday 21 April they will be showing for the first time at Sonning Common Village Hall.  The exhibition will be open 10-5pm and admission for adults is £1 for charity.  Free refreshments and nibbles will be on offer.

To find out more go to http://www.jacksgallery.co.uk/