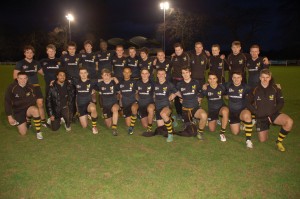 The Henley College reached the final of the AASE Plate Competition thanks to a 38-21 victory over Moulton College on Wednesday 17 April.

Having finished third in the Southern Pool of the AASE League, Henley were given crucial home advantage over Moulton who had finished fourth in the Northern Pool.

Henley started the game at a blistering pace with the home side keen to take on their opposite numbers at any given opportunity. Their direct and highly physical approach meant they were overpowering Moulton’s forwards in all areas of the game and spent the first 20 minutes mostly camped in Moulton’s 22 metre area.

When Moulton’s rearguard action finally cracked Henley crossed for two tries, one a close range effort from Connor Morrison closely followed by a smart piece of finishing by Alex Harrison, who showed a good turn of foot to break through and score under the posts.

Moulton fought back, keeping possession, and showed what a dangerous side they can be. Their first try was a clinical finish that started in their own half and finished with the left wing crossing untouched and running around behind the posts. This clearly gave the visitors a confidence boost and they produced a very similar score a few minutes later, to give them an unexpected 14-12 lead.

With the interval fast approaching Henley were keen to re-establish their lead and did this with some powerful drives allowing Shek Sheriff to muscle his way over on the stroke of half time, with Dan Barnes’ conversion making the score 19-14 to Henley.

Having taken stock at half time Henley were better able to deal with the threat posed by Moulton’s outside backs and attempted to include a bit more subtlety in their attack . They managed to achieve both of these despite having lost key players Craig Parker and Alex Harrison to injury. This was due in no small part to the impact of replacements George Hayes and Patrick Culligan.

Henley’s play was rewarded with tries for Barnes and hooker Ian Brown, with Barnes giving Henley a 33-14 lead. The nineteen point buffer at this stage of the game made it appear that the game was all but over, but the sin binning of Sheriff for a technical offence along with game ending injuries to Morrison and the influential Danny Williams allowed Moulton back into the game and they quickly took advantage with a deserved try which was superbly converted from the touchline.

Henley finally put the result beyond doubt with their sixth try of the evening after some excellent phases were rewarded with a try for Jackson Burton. The Henley College will meet Prince Henry G.S, Leeds in the AASE Plate final at Saracens’ new Allianz Park stadium. The two sides met in the semi-final of the Championships last season, with Henley running out winners.