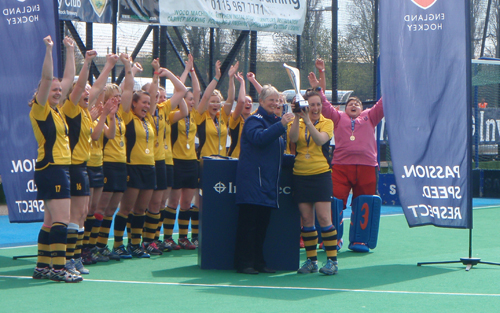 Henley Ladies 1st XI travelled to Beeston this weekend to try and crown their most successful league season to date. Under the direction of Coach Vicky Browne Henley had finished 5th in the league and were hoping to add the EHB National Trophy title to their spoils.

The occasion was a nerve wracking one for many of the players and the large amount of supporters at the national venue, cheering on both teams added to the feelings of anxiousness, there was a lot to play for!

Taking to the field against local rivals Sonning, Henley knew that the game was theirs for the taking, but that only seemed to make things harder, the expectation on the team was high. However, as soon as the first whistle went Henley were on it, and the first 15 minutes saw the ball continuously in the Sonning half. Even when the ball broke forward for Sonning the Henley defence were there to pick it off and create the attack for Henley.

Henley failed to convert their chances in the first half with Rachel Herbert coming close on short corner strikes and Kiera Halloran being upended just as she was about to place the ball home, and Sonning left the field at half time, much the happier.

The second half saw Sonning bring the game to Henley a little more and there were a few nervy moments when they threatened to break through. Some last ditch tackles from Kath Evans kept the scores even though and it needed something big to get Henley back on top. That something came in a moment of real controversy mid way through the half. As centre back Evans tried to double back to win a ball the Sonning forward practically ripped the shirt off her back. Evans reacted and was seen by the umpire, who dismissed her but failed to punish the instigator.

Henley were incensed and this incident was the game changer. They fought tooth and nail to make sure the injustice did not give their opposition the advantage. In the period they were down to ten men Henley forced 5 short corners and won a flick. Unfortunately it seemed that the luck was with Sonning and they threw everything behind defending their goal. The last play of the game saw the Sonning keeper save from point blank range from a superb effort from Georgie Metcalfe, and golden goal loomed.

As the whistle blew to start the first period of extra time the crowd, who had been brilliant, went a little quiet, seeming to sense the nerves of the players. This all changed however when 2 minutes into the play Captain Rachel Herbert picked off a ball from the Sonning attack and played it first time to forward Jen Buckham. Jen took on the Sonning defender, peeled out and hit a sweet reverse stick goal straight through the keeper’s legs.

As the ball struck the backboard the crown erupted and the Henley bench swamped the field to celebrate with the players. Henley were crowned National Champions and deservedly so, for the efforts of their players, coach, support staff and their amazing supporters!

Jen Buckham now retires from hockey but on summing up the events, said of her time at Henley, “A massive thank you to all of the amazing people at Henley Hockey Club. You are truly special.”