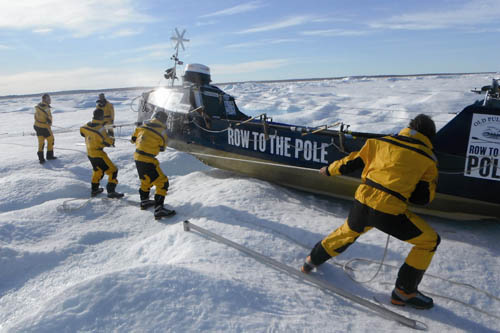 An incredible new exhibition at the River & Rowing Museum, Henley on Thames, captures the inspiring story of six men who rowed to the North Pole first by man power alone. Furthest North tells the story of the Old Pulteney Row To The Pole voyage high into the Arctic, through waters which had never before been explored by a boat under human power. During the 32 day adventure, the crew, led by veteran rower Jock Wishart, battled against fast-moving ice floes, polar bears, harsh Arctic storms and crippling cold. The boat, and its six oarsmen, finally reached their destination – the Magnetic North Pole – after dragging their boat over frozen ice which blocked the final few miles.

Jock as well as rower is an experienced polar explorer and he says, “I’m not just adventure tourist looking to gain celebrity status”.  His previous adventures and expeditions have included the Americas Cup in 1980, twice trekked to the North Pole in record-setting expeditions and in 1997 Jock and his team mate Duncan Nicoll came 10th in a trans-Atlantic rowboat race from the Canary Islands to Barbados.  The five other crew members were Mark Delstanche, Billy Gammon, Rob Sleep, Mark Beaumont and David Mans.  The crew were selected not just for their rower abilities but for their survival strengths and the last member of the crew, David Mans, was chosen from over 700 applicants who wanted to go on this expedition.  The crew lived and slept in cramped conditions for most of the voyage and Jock says the funniest moment was when two of crew decided that they had enough of the squashed sleeping conditions that they went to set up a tent on a small island and within 10 minutes they were back as a polar bear had appeared!

The extraordinary journey is documented in a narrative accompanying the photos. It is a a journey which should never have been possible, given the risks involved, but Jock Wishart had calculated that the retreat of the ice each summer had accelerated because of climate change and might clear a navigable route. The exhibition shows the scale of the endeavour as well as the stark beauty of the Arctic itself.

When we asked Josh why he did this expedition, he said, “In the words of George Mallory, ‘Because it’s there’ and everything else has been done.”  Originally from Scotland, Jock now lives in Kingston-on-Thames with his wife who he said he missed most apart from a wee dram of  malt whisky!

Jock adds, “The photos really capture the realities of our voyage. They show something of the physical reality of it all. In the end we completed a feat never attempted before and, I imagine, one which may not be attempted again for a long time.“

The photos for the Henley exhibition were taken by all the crew and were selected from Watlington-based local author Rod Macrae’s account of the voyage FURTHEST NORTH – and the book is on sale in the Museum shop.

Furthest North is hung on The Wall in the River & Rowing Museum and is open until 9 June 2013.

Tom Chappell’s First Half Century of the Season Gives Henley IVs a Win...
Scroll to top