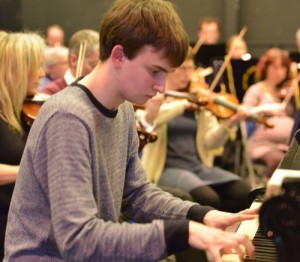 The Spring concert of the Langtree Sinfonia this year features music by Brahms and Schumann. The concert will be held in Dorchester Abbey, Dorchester-on-Thames on Sunday, 9 June at 7.00pm.

Paul Cox starts the evening with the overture to the opera, `Genoveva’ by Schumann. This piece, written between 1847 and 1849, was Schumann’s only opera, and whilst not as successful as those of Wagner, the overture makes an excellent addition to the concert repertoire.

The orchestra then takes on Brahms’s Piano Concerto No. 2, for which it is joined by the very talented local young pianist Edward Reeve (pictured above). Edward, who lives on St Andrew’s Road, has lived his entire life in Henley, and is currently a pupil in his final year at Reading Blue Coat School.  Next year, he will be Organ Scholar at Salisbury Cathedral before moving on to take up his Organ scholarship to read music at Queens’ College, Cambridge.  He has been playing the piano since the age of seven, and completed his Diploma of the Associated Board of the Royal Schools of Music when he was just fourteen.  He gained the Licentiate of the Royal Schools of Music at the end of 2011 with distinction.  Edward is a past recipient of the Sheila Mossman Award, and has twice been successful in completing the Regional Auditions for the BBC Young Musician of the Year competition.   He has performed piano concertos with other local orchestras, including the Reading Symphony Orchestra and the Aldworth Philharmonic.

The work shows Brahms at his most assured, and remains a towering achievement in the world of the concert pianist. It was Brahms who played the first performance in Budapest in 1881.

Brahms wrote his 3rd Symphony shortly after the above concerto. Unusually, it end quietly, with an autumnal feeling, but not before some particularly passionate and dramatic passages.