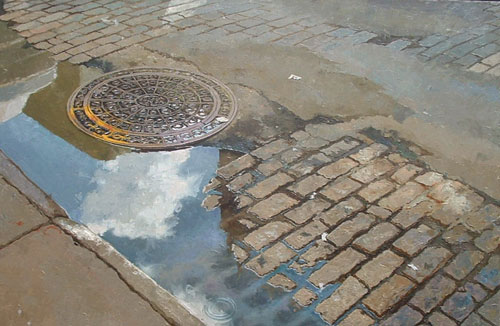 Middle class buyers have disappeared to be replaced by a wealthier connoisseur, reports Barry Whittington, owner of Whittington Fine Art in Henley.

Prior to 2011 there were good amount of collectors with between £5,000 and £8,000 to spend on art but as recession struck this market fell away. However, at this time the super rich started spending more.

“I have just sold a painting of a manhole cover by Richard Combes, the Manchester born artist who lives in New York, for £22,000 and one of an emulsion brush for £4,500,” says Mr Whittington, who has been trading from 26 to 28 Hart Street since 2002 and before then from Amersham, Buckinghamshire for a decade. “He specialises in objects that we often disregard in our every day lives and he’s extremely popular with the buying elite.”

Mr Whittington adds: “I don’t sell anything below £1,200 and I don’t sell prints – I’d rather close than do that.”

Customers are mainly UK based stretching from Preston, Lancashire down to the New Forest in Hampshire. “Half of my mailing list is in Buckingham and I tend to have five exhibitions a year here, which are well attended.”

But the nature of these exhibitions has changed due to the economic climate. Pre-recession Mr Whittington didn’t think twice about inviting an artist to run a solo exhibition but as the economy nosedived this proved too much of a risk. During 2012 and 2013 he has opted for group exhibitions to hedge his bets. He is looking forward to hosting one such show of four Scottish artists in September featuring Glen Scouller, Simon Laurie, James McNaught and Jock MacInnes.

“This year is shaping up well and I envisage returning to solo exhibition during 2014,” reveals an optimistic Mr Whittington.

With an average turnover of £400,000 the gallery’s customers include the former Chief Executive of ITV as well as various owners of gold and coal mines.

Brakspear’s Ale Trail Heads to the Country
Scroll to top