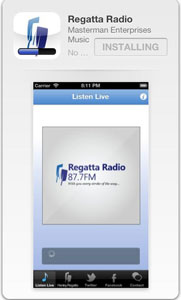 Yesterday the iphone Regatta Radio app was launched on the App Store and broadcasting starts tomorrow (Friday 29 June) for the qualifiers.

Celebrating it’s 8th year, Regatta Radio is a pop-up radio station for Henley Royal Regatta and is broadcast on FM frequency, 87.7FM.  The broadcast output covers all the build-up to the event, including interviews with athletes, crews, coaches, Henley Stewards, rowing journalists and many of the characters associated with the Regatta, including features about the history of Henley Regatta and the various different competitions. This year they will again be providing comprehensive coverage of the Draw held in Henley Town Hall on Saturday 29 June.

Once the racing starts on Wednesday 3rd July they will start each morning with a preview of the days racing by Rachel Quarrell, rowing correspondent of The Telegraph, followed by stroke by stroke coverage of every race with their exclusive team of commentators led by Robert Treharne-Jones, the voice of every world rowing event and one of only two commentators selected to provide on course commentary at the London 2012 Regatta.

Regatta Radio are pleased to welcome back Steve Rider this year,  one of the best known sports broadcasters in the UK, with a specially commissioned series of interviews.

Also this year they have a limited quantity (1,000) of exclusive ear-piece radios available to collect from the Regatta

Radio studio. Don’t miss a stroke of Henley Royal whether you are in the Steward’s Enclosure or watching from the towpath: a Regatta Radio ear-piece will keep you on top of the action for every race.  Available for a suggested donation of £2.00.

For more information and podcasts go to the Regatta Radio website @ http://www.regattaradio.co.uk/

In the Groove Live Accoustic Session
Scroll to top