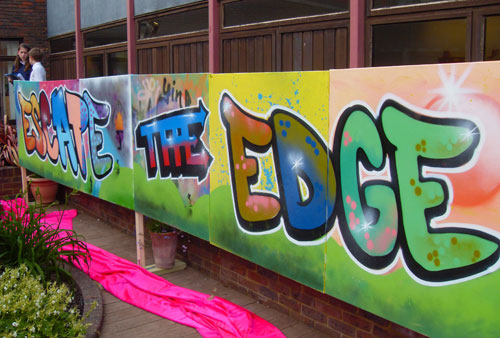 Last week saw the unveiling of ‘The Wall’, the Henley Festival’s latest charity arts project at Stoke Mandeville Hospital. Consisting of large, urban inspired canvases created by children from Chiltern Edge School (their part is shown above) and across the Thames Valley region, the finished piece will also be on display at the festival from 10th-14th July, alongside work by the likes of Banksy.

Stewart Collins, Henley Festival programme Director said: “I’m so glad we’ve got ourselves in a project like this – all in all it’s been hugely rewarding and eye-opening watching the artists working with their various groups. So many positive messages have been coming out.”

To accompany the unveiling of The Wall, composer and musical director Jeremy Avis went back to the roots of Hip Hop and Graffiti culture in 1970’s New York, creating an original sequence of Hip Hop-inspired songs. Entitled “Walls have Ears”, these were performed by singers from Aylesbury College and staff from Stoke Mandeville Hospital.

Using musical quotes, loops and samples from classic Hip Hop tracks over the last 30 years, the piece takes a fresh and humorous look at the process of creating graffiti, its history from Pompei, Paris 1968 and Vietnam to the present day as well as the emotions associated with it. Having written a section of the Water music for the 2012 Jubilee pageant on the Thames Jeremy Avis’ piece also contains 4 specially created raps inspired by the words and designs visible on each of the four new graffiti walls.

The Wall is sponsored by professional services firm KPMG, who are based at Reading’s Arlington Business Park.

Andrew Morgan, Senior Partner Thames Valley, KPMG said: “We’re really proud to be a sponsor of The Wall. I think the project has the potential to help young people discover the arts, raise their aspirations and encourage them to develop their own artistic skills. It’s important that everyone has the chance to learn about and experience different types of art, and projects like this have an important role to play in helping them do this. As a major employer in the Thames Valley with many young employees we have a real interest in helping young people in the region unlock their potential. We are pleased to work alongside Henley Festival to deliver this project.”

Vivienne Gordon, Arts Co-ordinator, National Spinal Injuries Centre, said: “The Wall is an ambitious and highly creative project produced by patients from the National Spinal Injuries Centre in partnership with Henley Festival. It forms part of the expanding Arts Rehabilitation Programme that is provided for spinal patients, enabling them to have a go at all types of practical creative activities.

“Patients have been involved in the whole development of their Wall, from initial concepts, brainstorming, designing and researching images relevant to their theme. Freedom of expression was actively encouraged and resulted in some very colourful images produced through paint splattering, hand-prints, mark-making and brush stokes.”