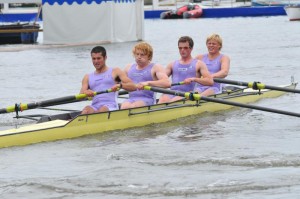 The 164th Henley Royal Regatta opens tomorrow morning and looks set to offer a feast of racing head-to-heads across all events with many 2012 Olympic medallists in action.

Racing begins on Wednesday with the top University, club and school crews and should build to a crescendo as the weekend approaches.

Fast-paced club crews from Molesey B.C., Upper Thames R.C., The Tideway Scullers’ School and Thames R.C. in the Thames Challenge Cup will be amongst the contenders to watch out for as racing gets underway in the five-day programme.

Saturday’s heat of the Grand Challenge Cup should prove eye-catching with European silver medallists Poland taking on the University of Washington – generally acknowledged as the world’s fastest student eight and who beat the Cambridge Boat Race crew earlier this year.

The winner will race a final on Sunday against the new-look British eight who are currently the overall World Cup leaders having won inSydney as well as at Eton Dorney 10 days ago.

On Thursday, the Diamond Challenge Sculls for men’s single scullers has thrown up a great clash between Joe Sullivan, who stroked New Zealand’s double scull to victory in the 2012 Olympic regatta and Luka Spik of Slovenia. The Slovenian was part of the crew which took bronze in the same race.

Olympic champion Mahe Drysdale and Olympic bronze medallist Alan Campbell have been drawn in opposite halves of the draw, leaving open the possibility of a tantalizing final between the two.

In the Silver Goblets Challenge Cup for men’s pairs New Zealand’s Olympic Champions Eric Murray and Hamish Bond start their campaign on Friday. A win here this week would give them a hat-trick of titles. As yet unbeaten in the pair, they are widely acknowledged as two of the finest rowers in the world, and given good conditions could set some course records.

Yet another Olympic champion, this time Mirka Knapkova from the Czech Republic, will start her campaign to add a third Henley single sculls win to her collection on Friday. If the races go to form, the Czech is likely to meet Emma Twigg from New Zealand, who won the Princess Royal Challenge Cup in 2009.

The draw for the Stewards’ Challenge Cup for men’s fours has thrown up the intriguing prospect of a potential Sunday final contested by the world’s best two lightweight fours from New Zealand and South Africa.

The Kiwis completed a stunning victory at the recent Eton Dorney-based World Cup but on Saturday must first progress past the British open-weight four who took a silver medal at Dorney – albeit in a slower time than New Zealand. The Springboks are the reigning Olympic champions in lightweight fours. On Saturday they must first get past New Zealand’s open-weight four.

After missing out on racing at Dorney, the new British women’s eight will finally have a chance to open their season. The crew, racing as Leander and Oxford Brookes, open their campaign on Friday against Newcastle University & A.S.R. Nereus.

Events for some of the world’s best club crews begin on Thursday. Spectators will have the chance to gauge the speed of the selected crews in the Visitors’ Challenge Cup for fours.  Four boats – Cambridge University, Molesey B.C. and two combinations from Harvard – look set to dominate this event.