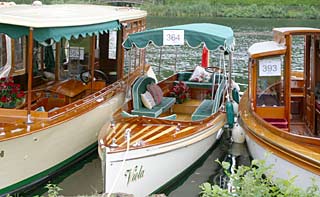 The 35th Rally will take place on The Fawley Meadows, Henley on Thames on 20 and 21 July this year.

Over 150 classic and traditional boats are expected to attend, ranging from rowing skiffs and canoes to elegant slipper and saloon launches and the fleet of Dunkirk Little Ships, which will be playing host to some of the last Dunkirk veterans.

After last year’s sad cancellation due to adverse river conditions, everybody involved is determined to put on the best show yet.

The Rally will celebrate a hundred years of slipper launches, with a replica of ‘Merck’, the first slipper launched in 1912 by John Andrews of Maidenhead and Bourne End appearing and other slippers representing every decade since.

Other craft appearing include one of the first and oldest racing power boats still afloat: the’ Reliability’ launch ‘Fixitor’.

As usual, ‘Alaska’, the oldest passenger steamer on The Thames, will be providing river trips for visitors.

On shore there will be the usual trade stands and boat jumble and displays of vintage cars and veteran bicycles, all contributing to the period atmosphere. For the first time, The Invicta Car Club will be attending with representatives of classic Invictas and Bugattis on display.

Two new trophies will be The Eccentric Club Trophy for the most eccentric traditional boat and a new photographic competition open to all amateur photographers: both participants and visitors. The category winners will receive printing and photobook vouchers and the overall winner will receive the new Peter Meech trophy.

As usual there will be an illuminated parade on the Saturday night and plenty of catering and entertainment to make this a perfect summer’s day out and picnic venue.

For more details to go www.tradboatrally.com