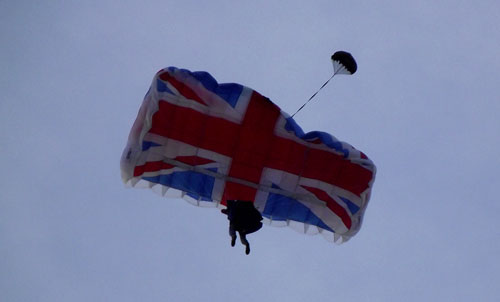 Before the music even started last night the audience were ‘stirred’ by the arrival of local stuntman Gary Connery who skydived down on to the lawns of the festival grounds.  Gary whose films include James Bond ‘Die Another Day’ but now best known for his ‘Queen’ skydiving James Bond role at the Olympic opening ceremony last year. After arriving on stage Stewart Collins, the Festival Director, asked “Do you have a ticket for tonight Gary?”

The music, played by the fantastic Royal Philharmonic Orchestra, opened the show with the James Bond famous theme tune.  West End stars Hannah Waddingham and Alex Bourne then delighted the audience with their powerful renditions of James Bond hits starting with ‘Goldfinger’ and included ‘Live and Let Die’, ‘Diamonds are Forever’, ‘View to a Kill’ and ‘For Your Eyes Only’ to name just a few.

Joanna Lumley, a Bond girl herself in ‘On Her Majesty’s Service, hosted the evening and provided great interludes of Bond facts between the music.  She said, “Even though I’m a pensioner, I can say that I’m forever a ‘Bond Girl’ and you can’t take that away.”

The evening ended with Hannah singing ‘Skyfall’, the first Oscar winning Bond song and the audience giving a standing ovation and wanting more.

A blockbuster evening on a beautiful night by the Thames.