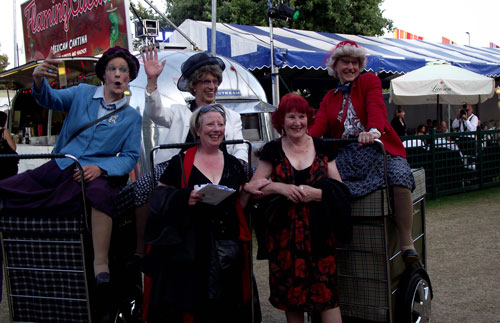 From the surfing audience of the Beach Boys on the opening night… the stomping Madness fans on Friday… to the younger crowd for pop artist Paloma Faith on the last night, the Festival goers reveled in all the performances on the main stage.  This year the Festival seemed particularly special for many as it would be the last at the Henley Royal Regatta grounds.

As well as the great music and art on show, there were also some great roving eccentric acts to entertain the guests before the main performances each night.  Granny Turismo (Doris, Mary and Marg) delighted the crowd with their shopping trolley dancing along to a heady mixture of music ranging from light orchestral to Hip Hop. Festival goers loved the three very funny French riders on horses who were training for the next Olympic Games and who had a very ‘French Attitude’. Rimski’s world’s first moving piano player also wowed the fans with his mad piano playing and dangerous stunts.

Delinus 03, the smallest Volkswagen camper van ever, offered a taxi service around the festival grounds, however you didn’t know when it would depart, how long it would take or which route it would go!

After the main show on the floating stage the audience were invited on to the riverside lawns to watch and listen to ‘Pandemonium’.  This performance started with the mysterious beauty of Ray Lee’s Chorus – ‘a celestial choir of spinning sound machines’; an elegant trio of stilt walking Optioscopes and the musical magnificence of the 35 strong corps of the Pandemonium Drummers (volunteer drummers from the London 2012 Olympic Opening Ceremony). From Wednesday to Saturday night this was then followed by a fantastic pyrotechnic firework display accompanied by the profoundly moving sound track  ‘And I will Kiss…’ by Rick Smith of Underworld.

Hilarious comedy was provided at the Festival by Alexander Armstrong, Barry Cryer and Colin Sell in The Salon. At the final comedy show on Sunday there was only standing room left for Rich Hall’s stand-up performance and his dead-pan style and rapid-fire wit was a great finale to this wonderful annual event.

Quite a few celebrities enjoyed the festival this year including Louis Smith; Olympic Gymnast Medallist (pictured above) Laura Robson, Cilla Black and Alan Titmarsh to name just a few.

Stewart Collins, Festival Director afterwards said,  ‘A warm sunny festival is always what we plan for and obviously this year’s festival has been exactly that, but in terms of the event and the shows I think I can be confident in saying that 2013 will certainly go down as having been one of the best. The Floating Stage shows were uniformly well received, whilst the supporting programme and particularly this year’s Roving Company of Eccentrica have been simply five star. All in all, it has been five days to savour and the comment received to date has almost uniformly been positive.’