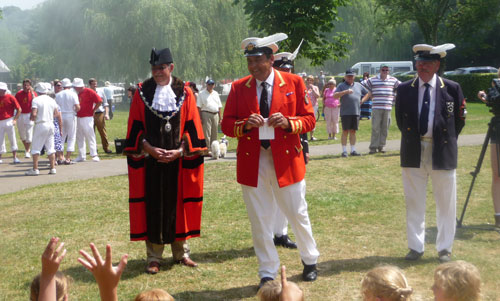 Yesterday the annual Swan Upping ceremony passed through Henley and the boats moored up at the River & Rowing Museum jetty.  Children from Years 3 and 5 from Valley Road school were visiting the museum yesterday to learn about this special ceremony and were greeted by the Queen’s Swan Marker and the Mayor.

The crowds on the river bank in Henley yesterday were probably a little disappointed not to see any cygnets being caught, checked and ringed but they enjoyed watching the lovely pomp and ceremony of this annual event.

In the Swan Upping ceremony, The Queen’s Swan Marker, the Royal Swan Uppers and the Swan Uppers of the Vintners’ and Dyers’ livery companies use six traditional Thames rowing skiffs in their five-day journey up-river starting at Sunbury and ending at Abingdon.  It takes 5 days to cover the 79 miles and goes through 15 locks.

When a brood of cygnets is sighted, a cry of “All up!” is given to signal that the boats should get into position. On passing Windsor Castle, the rowers stand to attention in their boat with oars raised and salute “Her Majesty The Queen, Seigneur of the Swans”.

The cygnets are weighed and measured to obtain estimates of growth rates and the birds are examined for any sign of injury (commonly caused by fishing hooks and line).

The swans are also given a health check and ringed with individual identification numbers by The Queen’s Swan Warden, a Professor of Ornithology at the University of Oxford’s Department of Zoology. The swans are then set free again.

At the completion of Swan Upping each year, The Queen’s Swan Marker produces a report which provides data on the number of swans accounted for, including broods and cygnets.

More details about Swan Upping can be found at www.royal.gov.uk/royaleventsandceremonies/swanupping/swanupping.asp

As part of the River & Rowing Museum’s Jubilee project there is an exhibition which brings together unique objects and artworks to illuminate and celebrate the historic tradition of Swan Uppng.

Henley Fringe… Something for Everyone
Scroll to top