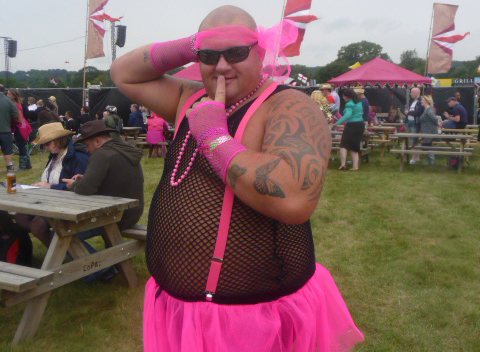 The Rewind Festival saw thousands of fans descend on Henley again this year all dressed up in their 80s gear.  The festival is renowned for its wacky costumes which just seem to get better every year.  We loved the Honey Monster, Zippy and George from Rainbow, the Crayola Crayons to mention just a few (see photos above).

Rewind is not just about the music – it’s a real festival of fun for the whole family.  New for this year was the popular Chapel of Love where you could have your own festival wedding.

Raising money for charity was also part of Simon Young’s Rewind festival from Wokingham.  He was wearing a t-shirt asking people to donate by text to the Ollie Young Foundation www.ollieyoungfoundation.org.  The charity has been set up in memory of his son who died at just five years of age with a brain tumour to raise funds for research and support.

The Hip Hop trio, Sugar Hill Gang opened the music on the main stage on Saturday afternoon and included their classic, ‘Rapper’s Delight’ which has been known for its rain dance effects and saw the heavens open just after they went off stage.  However this didn’t seem to damper the spirit of the fans at all.  Most are seasoned Rewind goers who come prepared for all weathers.  However, one festivalgoer posted a photo of her picnic on Facebook which included a tin of cat food she’d brought by mistake!

Other acts on Saturday afternoon were the Flying Pickets, Then Jerico and Billy Ocean who is a favourite at Rewind and was back for the third time.  Many fans had also come to see Chesney Hawkes who danced and sang along to his hit ‘The One and Only’.   Saturday night’s headline acts saw Heaven 17 singing ‘Temptation’, and Kim Wilde belting out her classic ‘Kids in America’.  The B-52 closed Saturday night with their dance-rock tunes ‘Roam’, ‘Deadbeat Club’ and ‘Love Shack’.

Donna and Derek from Wokingham who have been to the Rewind Festival for the last four years said, “It’s the most civilized festival you can go to, everyone is in great spirits and they share their stuff.”

Sunday saw the sunshine come out and Matt Bianco, opened with their appropriate song ’Sunshine Day’.  They were followed by Aswad, Cutting Crew and Sonia.  Later on, Go West really got the audience going and lead singer, Peter Cox’s whose distinctive voice has really stood the test of time, showed this off with ‘Call Me’ and ‘We Close our Eyes’.  They were followed by Blancmange famed for ‘Living on the Ceiling’ and Belinda Carlisle who delighted her fans with a fabulous rendition of ‘Heaven is a Place on Earth’. ABC’s set opened with ‘Poison Arrow’ and was followed by some of their great anthems including ‘Look of Love’.  Martin Fry seemed to really connect with the audience and even pointed to two fans dressed up as Bananas in Pyjamas and said how much he loved those guys.

The final act of the festival saw the Pointer Sisters, original members Ruth and Anika Pointer joined by Ruth’s granddaughter, Sadako Johnson on stage.  The audience really loved all their classics – ‘Automatic’, ‘I’m So Excited’ and they closed the festival with ‘Jump’ with the whole festival audience jumping up and down.  A great finale to a fantastic two days of 80s music.

Walkover at The Walk
Scroll to top