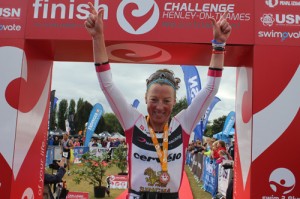 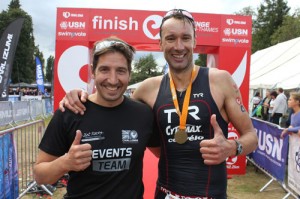 The third Challenge Henley took place yesterday weekend, with over 1400 athletes lining up to take part in either the half or full iron distance events.

Stephen Bayliss led the men out of the swim in 48:04, followed closely by Rhys Davey to take him into an early lead. However, there were some strong bike legs out on the cycle course – especially Tom Lowe, who managed to blast through a 4:42 split, leaving him right on the toes of Bayliss coming into T2. Out on the run, Lowe looked strong and 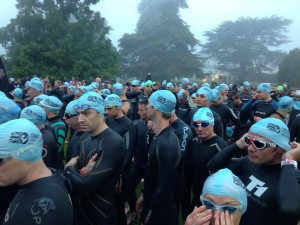 confident, and was able to inch further away from Bayliss as the laps passed by. Victorious down the finishing chute, in 8:30:19 Lowe posted an impressive 2.48 marathon, the fastest run split of the day, giving him a lead of nearly seven minutes on second placed Bayliss. Joel Jameson, who also posted a sub nine-hour race time, finished in 8:49:23, rounding off the men’s podium.

In the women’s race, all eyes were on the female pros – including the familiar faces of Bella Bayliss and Yvette Grice who have both raced since the first Challenge Henley event in 2011.

Grice led out of the water, posting a fast 57-minute swim, followed by Bayliss and Grant who came out just over 3 minutes later. Out on the bike course, it was Bayliss’ for the taking, and she was able to speed past Grice, posting a 5:18 bike split – the fastest lady of the day by nearly 23 minutes. With a lead of over 20 minutes coming into the run, it was soon clear that Bayliss had the win secured, and she finished in an impressive time of 9:41. Grice finished in 10:05 and Julia Grant took third place, with a strong and consistent performance across all three disciplines, finishing in 10:15:59. 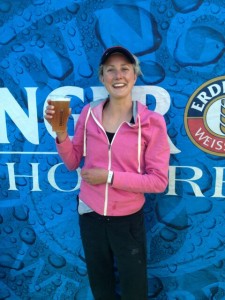 And it was not just the professionals that were holding the attention of all the spectators either. Olympic pole-vaulter Nick Buckfield finished the event in an impressive 12:30:06, posting a 1:15 swim, 6:24 bike and 4:38 run.  He tweeted “It was tough, very tough, was in bits on the run on second lap! Henley rocks!! Awesome support team!!!” Congratulations to Nick on a very fast time, his first attempt at racing the distance.

There were two marriage proposals on the finish line too!

‘We were over the moon with the turnout at this year’s event, the atmosphere across the whole weekend has been electric, and we would like to send out a big thanks to all athletes that made the day just what it was.’ He continued, ‘From professional triathletes, to Age Groupers, to those that want to raise a bit of money for their chosen course – well done to all of you!’