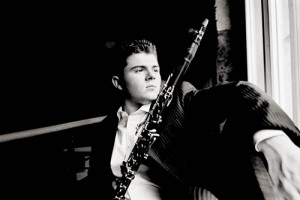 The early evening concert will feature the virtuosic Weber Clarinet Concerto no 2 which demonstrates the rich tones of the instrument and allows a display of Julian’s dazzling technique and style to perfection.

Firmly established on the international concert scene Julian has appeared as soloist with orchestras and chamber groups around the world including at the BBC Proms and at the Queen’s 80th birthday celebrations. This season sees the launch of ‘Julian Bliss and the King of Swing – the Benny Goodman Legacy’; a project focusing on the musical life and times of the legendary clarinetist Benny Goodman.

Julian Bliss featured in Channel 4’s documentary ‘Gifted’ having started playing the clarinet at the age of 4, when he was given a Lyons C Clarinet, a clarinet designed to let children begin the clarinet four or more years younger than usual. In 2007 Julian was invited by Conn Selmer to design a range of affordable clarinets bearing his name.  The BLISS range of clarinets was recently launched world-wide and have received much praise.

Henley Symphony Orchestra, under the guidance of its Music Director Ian Brown and led by David Burton, continues to go from strength to strength, attracting more than 70 players from across the Thames Valley. The concert also includes Elgar’s lushly orchestrated portrayal of Sir John Falstaff, Shakespeare’s ‘fat knight’, in the ‘Falstaff Symphonic Study’ which contrasts with the joyous Bohemian stamp and whirl of Beethoven’s Seventh Symphony.

The popular Christmas concerts with the HSO will be at Christ Church, Henley on Sunday 15th December at 4.30pm (for young children) and at 6.30pm.