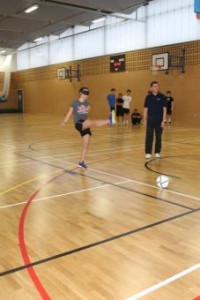 Motivational speaker Steve Cunningham visited The Henley College on 6 November to give an inspirational talk to around 200 students. Cunningham dreamed of becoming a professional footballer, until he found himself totally and irreversibly blind at the age of 12. Offered the chance of selling matches on street corners, Cunningham took another path, and has made it his lifelong ambition to break down every barrier that stands in his way. A world junior sprinter, he went on to play for the England blind cricket team. He trained with Aston Villa, before fulfilling his lifelong ambition by leading the English blind football team to the World Cup. Cunningham then set himself an audacious challenge: to become the fastest blind man on the planet. He powered to world speed records on land and sea, then took to the air and found international media fame as the world’s first blind pilot.

Today he tours, speaking at a wide range of schools, colleges, universities and business organisations. He has worked with firms including KPMG, Chrysler, Michelin, Royal Bank of Scotland, Lloyds TSB, Orange, Rolls Royce and Sony. Sir Geoff Hurst MBE has previously said of Cunningham: ‘Nobody has inspired me in the same way.  His story is an inspiration, and his personal drive and ambition quite outstanding. A hero in every sense of the word.’

Students also participated in a game of ‘blind football’, playing blindfolded to gain a greater insight into playing sport, and indeed everyday life as a blind person. Charlie Eckton, Head of Student Services at the College, said: ‘Playing football blindfolded was a fantastic challenge for our students that required focus and for them to put absolute trust in one another. Steve was an inspiration and a role model for all of our students, including those with disabilities. As he puts it, he doesn’t have a disability, he has a different ability. The students also enjoyed meeting his faithful companion Foster, a German Shepherd, who was excused from the football in case he got too excitable.’ Student Leah Foley, who is studying  Sport and Exercise Science, added: ‘As a disabled person myself, Steve has taught me to be confident in who I am and what I want to be in the future, and not let my disability stop me in any way. I am aiming to go to the 2016 Paralympics in Brazil doing 100m, 200m and relay.’

Rockin’ Start to Jazz and Blues Festival
Scroll to top