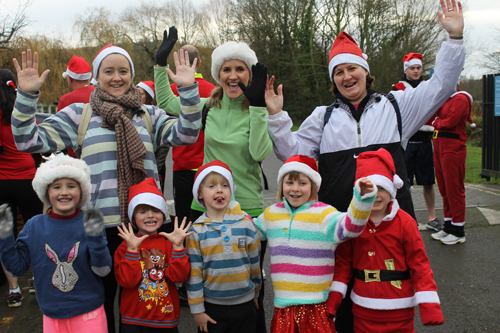 A sea of Santa hats was out around the river yesterday morning – a real spectacle to be seen.  The Mayor, Stefan Gawrysiak, was delighted with the turnout for his Santa Run yesterday morning. About 100 people from serious runners, to families and dogs came out to run and walk the 2 mile course, which started and ended at the River & Rowing Museum and took in the river towpath, the station and the Invesco Perpetual, Perpetual Park for the first time.  This was the third Santa Run which was started by the then Major, Pam Phillips in 2010.  All the monies raised goes to the Mayor’s charities which this year are Riverside Counselling, Age UK Oxfordshire, Sue Ryder, Chiltern Centre and Headway.

Before the race started Angie Best got the runners and walkers warmed up with a short warm-up exercise before the Mayor set them on their way on his trusted bike!

The Henley Lions helped organise the event again this year with marshaling and providing soup, hot chocolate and rolls at the finish and this year Waitrose in Henley also donated mince pies.

The first person home was Harry Roe from Sonning Common, aged 12 who goes to Gillotts, in 2nd place was Hilary Lunn aged 11, who goes to Reading Boys School and 3rd was Archie Barker who is 10 and goes to Sacred Heart School.  The first girl home was Grace Oliver, aged 13 from Henley who goes to William Borlase School in Marlow. The first man home was Christopher Hanlon from Reading who had never done the run before and was surprised to win as he said, “I’m not really a serious runner, I’ve only ever done one half marathon but that was a few years ago.”