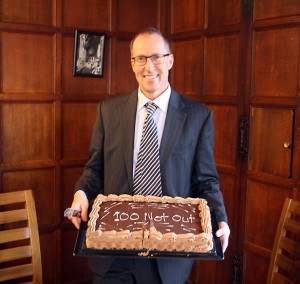 In September 1980, Richard Mannix arrived at Shiplake College as a young Biology teacher. We are now approaching the end of Richard’s 100th term at the College, and decided to mark this impressive landmark with a cake!

Renowned for his patience and willingness to help pupils talk through their hopes and plans for he future, Richard was soon promoted to Orchard House as the Housemaster for the day pupils. Throughout his time at Shiplake, Richard has been heavily involved with hockey. With his belief in building team spirit and involving every member of a squad, he has produced generation after generation of highly successful U15A hockey teams. During the summer terms he has run a Junior Tennis squad developing players to progress to the 1st and 2nd teams.

Richard has always been renowned for his innovation, too. He devised the plans that created a recording studio in the College’s historic water-tower and initiated the College’s annual gig giving musicians a chance to perform contemporary music in front of an enthusiastic audience. 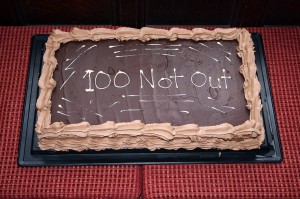 Richard finished his stint as Orchard Housemaster and became Director of Studies overseeing the College’s academic programme. Training successfully as a school inspector Richard took a special interest in helping teachers to improve the quality of learning at the College. His final role has been as Senior Master, assisting colleagues to prepare for external inspections.

As a teacher who was always keen to develop the Shiplake community as a caring and supportive environment, it has been most appropriate that Richard’s own family should have also become heavily involved with Shiplake. His son and two daughters progressed through the College, onto university and then to their careers. Recently Fran, Richard’s wife, has joined the College as a Receptionist.

‘Richard has spent nearly all his teaching career at Shiplake. His loyalty and devotion have helped to build Shiplake into the successful school that it is today. Although we are celebrating 100 terms today, later in the year we will be wishing Richard a happy retirement when he finally marks his last pile of biology books’, said Gregg Davies, Headmaster.

What the Dickens?…Wins Christmas Window Competition
Scroll to top