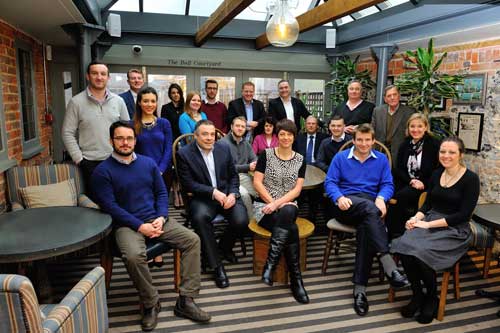 Henley-based Brakspear has been selected as a finalist in the Publican Awards 2014, a national competition to find the best pub operators in the country.  It is one of just three shortlisted companies now in the running for the title of Best Tenanted Pub Company, which will be announced in March.

The Publican Awards are open to pub operators from across the UK and are run by leading industry magazine The Publican’s Morning Advertiser.  To make the shortlist, Brakspear had to submit a presentation outlining the company’s support for its tenants and lessees, its investment in its 130 pubs and its vision for the future of the business.

The next stages in the judging process included a tour of four Brakspear pubs by one of the judges; an independent survey of tenants, and a number of professional mystery visits. Finally, Brakspear’s directors were interviewed in London by a panel of industry experts, including City analysts, journalists, pub guide editors, top industry consultants and industry body chiefs.

The Publican Awards 2014 will be announced at a dinner in London in March, where comedian John Bishop will be presenting trophies to the winners.

Brakspear chief executive Tom Davies said, “We’re delighted to have been shortlisted in the Publican Awards, which are regarded as the ‘ones to win’ in the pubs industry, largely because of their robust, thorough judging process. The judges’ decision will be based on information gathered independently from our tenants and pubs as much as from us, so whatever happens, it will be a fair and balanced verdict.

“Obviously, we’ll be disappointed if our name isn’t called out at the Awards presentation in March, but to have come this far is still a huge achievement, and a welcome endorsement of our business. It demonstrates that we are leading the way with support for our tenants and that our open, transparent and approachable way of doing business has not gone unnoticed.

“We believe Brakspear has the best pub estate in the country and now we are being recognised for offering the best support package for the tenants of those pubs.”

Some of the criteria on which the Best Tenanted Pub Company category is judged are: solid financial performance; innovation; strong support for tenants and for business development managers; excellent communication to tenants; good support for new tenants and comprehensive training. The two other finalists are Wadworth, based in Devizes and Channel Islands operator Liberation.

May Fair Plans Gearing Up for Great Day
Scroll to top