The TV series Midsomer Murders has charmed millions of fans both in the UK and overseas, with its location, tongue-in-cheek humour and easy to watch characters.

Many of the real Midsomer Murders locations are spread across South Oxfordshire including a number in Henley and the surrounding villages.

This week SODC and Henley Town Council launched a new Midsomer Murders Henley Walking Trail to encourage visitors to the town. As part of Tourism week, SODC also invited businesses to join them on a coach tour on Tuesday 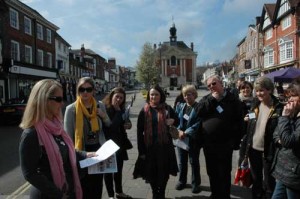 of some of the filming locations, visiting Wallingford, Dorchester, Thame, Nettlebed, Watlington and Henley.

Fans of Detective Barnaby will recognise many of the filming locations within Henley – the Town Hall played an important role in the episode Last Year’s Model where the Town Hall doubled as Causton’s court house and the Argyll Pub in Market Square (where the coach tour had lunch on Tuesday) was visited by Barnaby & Jones in the same episode.  The pub now as a brass plaque at the bar where the detectives stood! 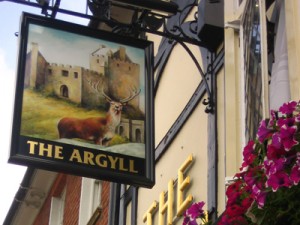 Other locations in Henley include the butchers shop, Gabriel Machin in Market Square, Hotel du Vin in New Street which is often used for filming, La Bodega restaurant on Hart Street and the Tudor House antiques shop on Duke Street.  The new Henley trail also encourages people to walk along the River Thames where the Midsomer Regatta episode was filmed with local Olympic legend, Sir Steve Redgrave.

You can also explore the wonderful riverside film locations with Hobbs of Henley on their scheduled themed Midsomer Murder cruises.

The Mayor of Henley, Councillor Stefan Gawrysiak is also getting behind this tourism initiative by hosting a Midsomer Murder evening for local businesses on Thursday 24 April at Hotel du Vin.  It will be an opportunity for businesses to get together to talk about how they could benefit from the Midsomer effect and ideas for offering special packages to potential visitors.  During the evening the guests will also have the chance to solve the crime in a special Midsomer Murder thanks to script writer James Edwards and The Henley Players and there will be key speakers Chris Behan, author of Exploring Midsomer and Sarah Osborne, Tourism Consultant who runs the website www.visitmidsomer.com.  If you are a business in Henley and would like an invitation to this event, please email Helen Harvey at Helen.Harvey@southandvale.gov.uk