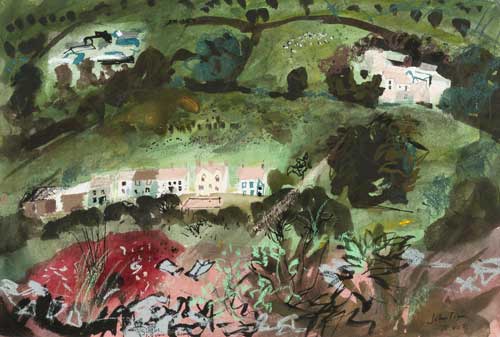 The John Piper exhibition opened on Saturday with a private viewing at the Bohun Gallery in Reading Road. Famous for his romantic landscapes, views of ruined churches, stately homes and castles, John Piper is considered to be one of the most significant British artists of the 20th Century. His commission to record the nation’s ancient pre-war buildings, countryside, rural industries and prehistoric monuments prompted John Betjeman to declare: ‘You have saved much of England by your pictures of architecture and landscape.’ This contribution to the portrayal of Britain’s architectural heritage is unmatched by any other artist and his dramatic and romantic imagery has become part of Britain’s artistic psyche.
The breadth and diversity of John Piper is celebrated at Bohun Gallery this Summer. Bohun’s long association with the artist (he was one of their earliest exhibiting artists when the gallery opened in 1973) has allowed Gallery 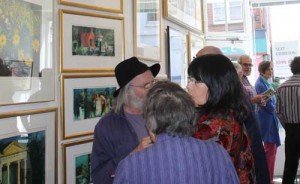 Director Patricia Jordan Evans the opportunity to source some of the very finest examples from his incredibly varied output. Piper produced not only abstract paintings and reliefs, but also studies in photography, theatre designs, ceramics, textiles and stained glass. This exhibition succinctly brings together the many aspects of John Piper’s legacy whilst portraying some very fine examples of British architecture.

The splendour of Britain’s churches and Piper’s unique response to them are a particular focus of the show. Highlights include a recently discovered ‘double-sided’ canvas which offers a rare opportunity for collector’s to acquire two images by the artist. One side depicts a Romanesque study of ‘Risen Christ at Emmaus’ and the reverse side holds the surprise element, which is a completed painting of the Twin Chapels at Capel Seion,Wales. Original paintings of church interiors include early images of locations in both Dorset and Cambridgeshire while others set the church in its landscape context in sweeping views over the Norfolk and Hampshire countryside.

Amongst this extensive show which includes textile design, ceramics and photography are a selection of silkscreen prints which include some of Piper’s most quintessentially British views. Of particular interest to collectors will be the rare opportunity to see the complete set of five artist proof images of Scotney Castle, Kent. The artist’s celebrated stain glass designs are included with a beautiful collage design for ‘The Tree and the River of Life’ in the Church of All Saints, Clifton, Bristol. Aspects of Piper’s output which visitor’s may not immediately recognise are his series of Foliate Heads and his ‘Eye and Camera’ series of nudes.

The show emphasises the extraordinary diversity of this 20th Century Master and his technical ability within so many different fields. John Piper’s passion for the countryside of England and Wales runs throughout his work and justifiably earns him the position of outstanding painter of architecture of the modern period.

The exhibition runs from 3 May to 17 June.