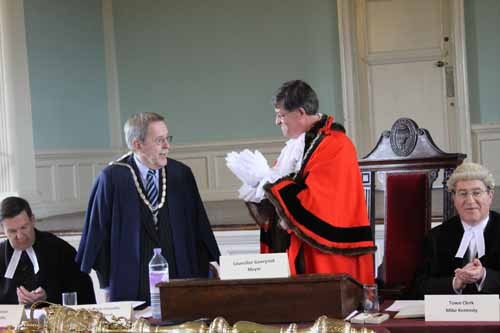 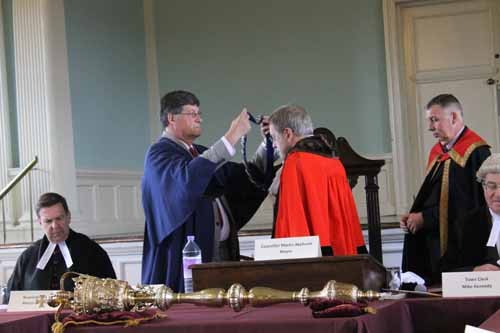 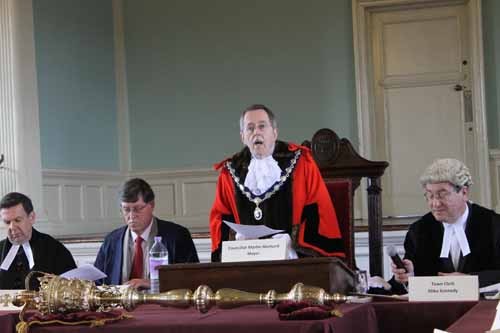 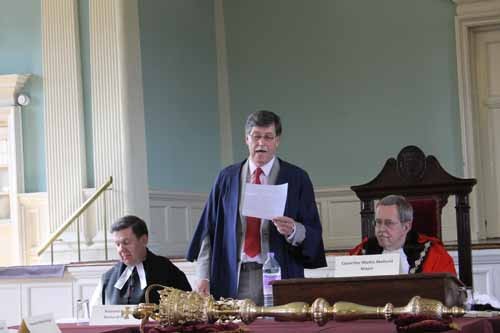 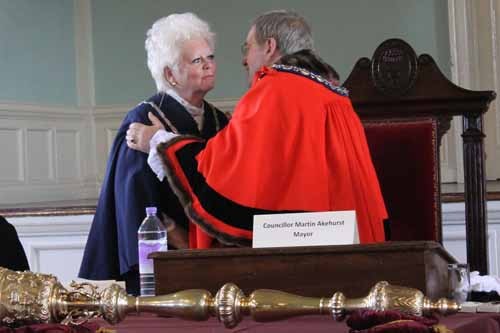 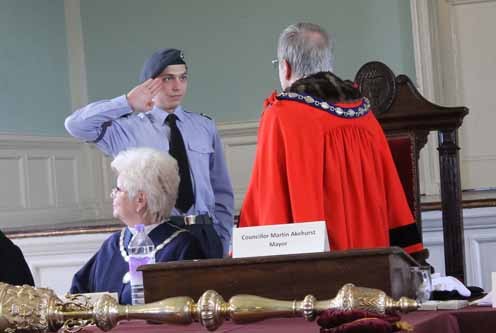 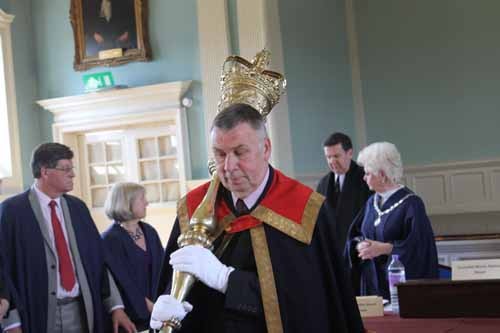 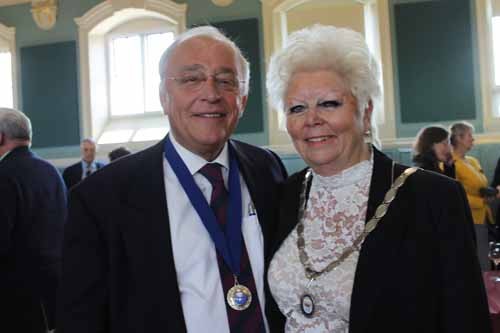 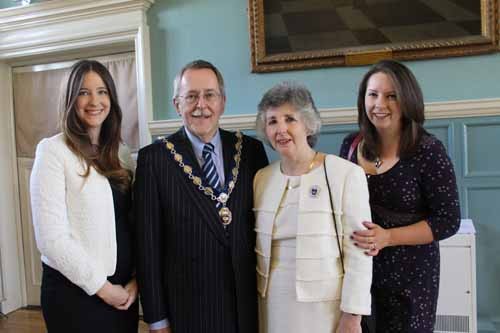 Martin Akehurst officially became our new Mr Mayor yesterday morning at the official ceremony at the Town Hall.  He was proposed by Councillor Dieter Hinke whos said, “Martin is a man of ‘many parts’ and will be an excellent Ambassador for Henley.”

Martin thanked his fellow Councillors for the confidence they have shown in me.  He said, “This is a great honour and I will do my utmost over the next year to work for the benefit of Henley-on-Thames.”

Martin went on to say, “You’ll be glad to know that, according to my doctor my ‘many parts’ have stopped dropping off and I’m fit for purpose.  I’m probably the only Councillor with a certificate of fitness for the Mayoral year.”

He thanked the outgoing Mayor, Stefan Gawrysiak and said he would like to carry on the great charity work supporting Henley charities in three ways.  “Firstly, helping them work together. There are people out there who would love to help – let’s get them fireed up and encourage them.  Secondly, helping them get their messages out there and thirdly lets recognise those people who gladly give their time to benefit the community. My theme this year will be bringing people together and working as team.”

Martin finished his speech with a fitting quote on the definition of working together as team which also gave recognition of the WW1 centenary this year from his grandad, Sergeant Henry Martin White.  ‘The whistle went.  We went over the top.  The bloke next to me fell. I was playing cards with him last night.  We had a pint..or two..on the last leave.  We had our fallings out.  Everyone did in the trenches..that was normal.  But you knew… when you went over the top he’d be there with you, watching your back.  Like he always did out there, or on leave.  Looking out for you and your mates. He was a good … bloke.  And decades later I still ask myself..every day – why him not me?’

Retiring Mayor, Stefan Gawrysiak said, “Being a Mayor of Henley is an enormous privilege and honour. Catherine and I have enjoyed it enormously. Henley is a wonderful town enhanced by the many festivals and voluntary organisations. Some people have said to me what have been the highlights. Everything has been a highlight from the small visually impaired group that meet in the Greys Green village hall to lunch with Prince Edward and the Countess of Wessex in Bled.

It has been a year of achievement for Henley Town Council. Twinning with Bled, progressing the neighbourhood plan, Mill Meadows toilets, Toddler Playground, cleaning the streets of Henley, removing business waste in the evenings and the Skatepark on the cusp of planning permission. I will continue to support the skatepark project because it is the right project for the young people of Henley.

The focus of my charities have been Henley based with respite as a theme. Sue Ryder, Headway, Chiltern Children Centre, Age UK Oxfordshire (The Bluebells centre) and Riverside Counselling. Huge thanks to Emma, Jane, Sheridan, Moira, Olivia and Wendy for all your fantastic help over the year. Together we have raised £4,700.

It has been a joyful, happy, wonderful year for Catherine and me. It will be nice to return to the back benches and resume my good humoured sparring with Councillor Hamilton!

Mr Mayor and Mayoress. Martin and Glynnis you have a fantastic year to look forward to. Both of you will do an excellent job. A word of advice for Martin Mr Mayor and if you heed this advice you will not go wrong.. Do not forget that in your life Glynis wears the trousers and on the Council Jenni wears the hats.”

Jeni Wood was voted in as the Deputy Mayor.  Jeni was Mayor in the year 2010-11 and both Councillor Liz Hodgkin and Councillor Pam Phillips who proposed her said said she is ‘”very passionate about Henley.”

The Mayor’s Cadet Alexander Hearn Phillips from Henley’s Air Squadron was appointed and presented with this official badge.

Readings and Auditions for Accrington Pals!
Scroll to top