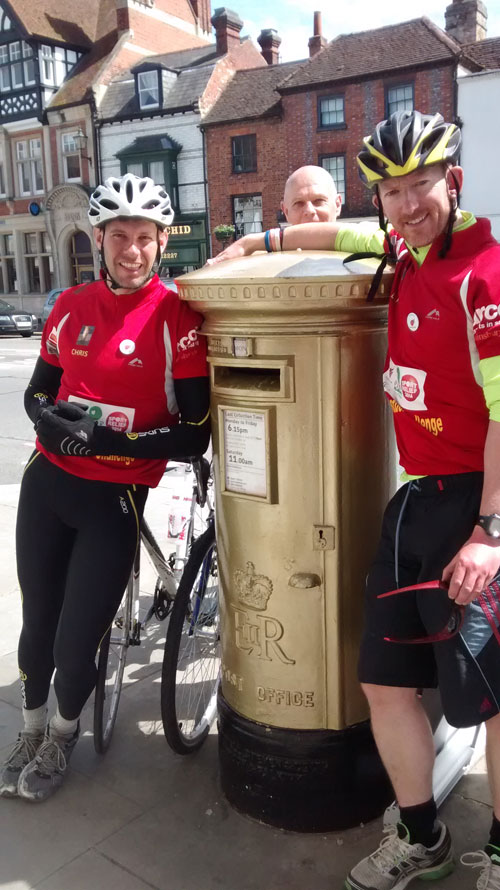 On Saturday 31 May two intrepid (or maybe just mad) cyclists commenced a 3,000 mile 27 day trip to visit all 111 Gold Post Boxes from London 2012’s Olympic & Paralympic Games as well as over 20 venues used. Chris Britton of Bristol and Lucas Meagor of Kingston upon Hull will be supporting three charities – ParalympicsGB, Tree of Hope and Sport Relief.

The trek commenced with Helen Glover’s post box in Penzance (for a gold in the Women’s pairs rowing) at 8am this Saturday and concludes on Thursday 26 June at the post box on Hessle Road in Kingston upon Hull commemorating Luke Campbell’s Gold medal in Men’s Boxing Bantem weight. In between the route hs taken them to Sark in the Channel Islands (courtesy of Condor Ferries) and will go onto go through the Olympic Park, to the Isle of Man (compliments of the Isle of Man Steam Packet) and includes the three Northern Irish boxes (ferry back to Scotland courtesy of P&O). It is believed to be the first man powered continuous trip to all 111 Gold Post Boxes. They are also blogging each day as they progress.

This Saturday (7 June) the cyclists headed into Henley, where the box is a celebration of Henley Rowing Clubs which is located outside the Catherine Wheel on Hart Street. They then went further down the Thames into Maidenhead for the first of three for Sophie Christiansen – here being Paralympics Gold medal Equestrian: Mixed Individual Freestyle Test – Grade Ia. It’s then Eton Dorney and the rowing lake where GB won many medals of all colours before Sunningdale and Egham for Sophie Christian’s second and third boxes for Paralympic golds in equestrian: Mixed Individual Championship Test and Dressage Individual Freestyle Test Grade Ia. Sophie is hoping to try and meet up with the pair.

The day concluded as they arrived in London and Mo Farah’s boxes for 5,000m and 10,000m gold’s in Teddington and Isleworth. Lucas witnessed the former first hand as a games maker in the stadium. They ended Saturday at Pete Reed’s Chiswick box for his Olympic gold as part of the Men’s rowing four.

The duo are no strangers to long distance cycling having completed Land’s End to John O’Groats over 9 days in 2011 and over 600 miles in the West to East challenge across the UK in 2012. The cyclists will have support vehicles each day, including six days thanks to Morphed Landscape and will transport snacks provided by Sainsbury’s. Chris, 36 from Brislington, Bristol, has been grated four week’s leave from his employment with the MOD in Bristol and meets Lucas on the train to Cornwall on Friday. Lucas, 38 of Holderness Road, Kingston upon Hull, was a Games Maker at the Olympic Stadium for both the Olympic and Paralympic Games in 2012 and now studies Events Management full time at Leeds Metropolitan University. He is keen to take Seb Coe’s message of inspire a nation and is hoping Lord Coe will meet them on route. The pair met when working in Bristol. Lucas is from Frome, Somerset originally. Lucas has planned the route with mapping by Philips and provided courtesy of Waterstones, Kingston upon Hull.

The 27 days represents the number of days competitions during the two games combined. Chris selected Tree of Hope to support a friend’s child, Jaye, from Bristol, who has cerebral palsy and fund raised will go towards key operations to help him walk and develop. Lucas wanted to support Paralympics GB after having his eyes opened at London 2012’s Paralympic Games and seeing the pride in the success of the country paralympians. He recently attended a sports fest where the legacy lives on in engaging with those with disabilities in the range of sports under their programme and even had the opportunity to meet 4 time gold medallist, Dame Sarah Storey along with Sochi 2014 Winter Paralympic Gold medallist, Kelly Gallagher.

Sport Relief encompassed the link to a range of supports and using sport to raise funds to support a range of causes throughout the UK and Africa. Both Chris and Lucas were inspired throughout London 2012 and be visiting each venue used for the games on route (including all the football stadia) hope the trip will also promote the legacy of sport and the opportunities it brings.

The pair are in distinctive specially designed T-shirts, thanks to ARCO and the route will be traceable online each day and a blog will be posted each night at www.lucaskeepsrunning.co.uk. They will have a pop up banner (thanks to David Richards UK Ltd & Magic Spoon Corporate Identity Design) to promote the fund raising on route too – and welcome anyone wishing to join them or cheer them on. The route plan is also online and they very much would like a convoy of bikes to complete the journey with them from Barton upon Humber (by the main bus stop) to Hessle Road, Kingston upon Hull on 26 June at 4:30pm.