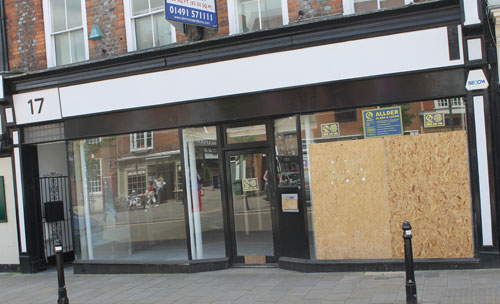 Visitors and residents of  Henley are being encouraged to make the most of a new interactive window dressing, which will be installed on one of the town’s shop units, with a prize on offer for the best design.

Work is being carried out on 17b Market Place, an empty unit recently vacated by Blockbuster, which will see half of the shop’s window space being decorated by the River and Rowing Museum while the other half will feature an interactive chalkboard that passers-by can draw or write on.

Anyone who creates a design on the chalkboard is encouraged to take a photo of their work and either tweet it to @SOxonTourism using #Henleychalk or email it to economic.development@southandvale.gov.uk. The best photos will then be featured in a collage, which will be on display at the town hall at the end of July, with the best one picking up a prize of tickets to a film of their choice at Regal Cinema. The closing date is Saturday 19th July.

The project to dress the windows of empty units in Henley is being carried out by South Oxfordshire District Council, working with agents Simmons and Sons and Ballards, to help improve the look of the town during this summer’s festivities and provide the thousands of visitors with something interesting to look at. 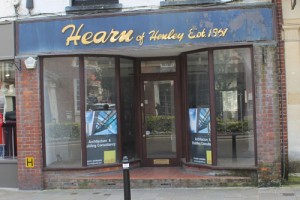 It is hoped that the project to dress the windows will encourage a positive attitude to the vacant units, help increase the time people spend in the town centre, and create intrigue in areas that have become quieter.

An information guide about the project, also featuring a map of the town centre, will be available from the Town Hall information centre.

This is a great opportunity to utilise available space and link some of Henley’s key businesses to the town centre. It’s been great working with the River and Rowing Museum and Lady Sew and Sew, they have created fantastic window displays giving much needed vibrancy to these vacant units

Helen Harvey, Economic Development Officer at SODC who is leading the project said, “There have been a few bumps in the road whilst organising the project, but no broken window, lost keys or lack of electricity was going to prevent my aim to get these units in mean-while use. The chalkboard at 17b Market Place evolved from this and I hope it appeals to everyone and I look forward to receiving the entrants to the chalkboard competition.  Ballards and Simmons and Sons have worked very hard in the background to coordinate building owners, cleaners and meet my demands! I’d like to say thanks to them for their efforts.”