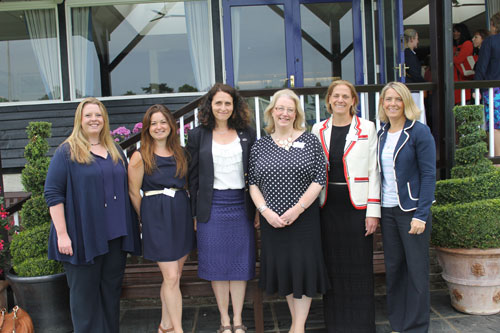 The Henley Women of Inspiration group on LinkedIn, which was created by Lindsay McLoughlin, hosted its first Networking Breakfast on Friday (20 June) at the Henley Women’s Regatta in the beautiful setting of the Remenham Club.

As a Henley business, Lindsay McLoughlin from www.proofedbylinds.co.uk created the Henley Women of Inspiration group on LinkedIn for ladies who live and/or work in the general Henley on Thames area. The group now stands at around 200 members with more requests to join every day. The group’s participants are very active; they ask questions, share information, seek advice, promote local events and share blogs.

The Networking Breakfast held on the opening morning of the Henley Women’s Regatta – the single most important event in the British women’s rowers’ calendar – was attended by over 90 businesswomen from Henley and the surrounding areas.

Miriam won Britain’s first World Championship Medal, became a World Champion and then won a silver medal with her crew in the quad sculls in the Sydney Olympics, one of whom was her sister and another a young Katherine Grainger. This was the first time a British women’s crew had medalled at the Games. Miriam represented Great Britain for 11 years and competed at 3 Olympic Games.

Following retirement from sport Miriam has inspired a future generation of women rowers and athletes from all sports, whilst working for the British Olympic Association and TeamGB, as well as organising the Rowing and Canoe Sprint Village for London2012.

The Henley Women’s Regatta is the pinnacle event for women’s rowing. It inspires over 1600 girls and women to take up oars and train day in day out to get to race on this iconic stretch of the River Thames. This is Miriam’s second year as the Chairman, leading a group of very dedicated volunteers to stage this year’s largest ever event.

Her presentation was both thrilling and highly entertaining. Some Henley Women of Inspiration guests were even inspired to enquire about the prospects of taking up rowing as an adult, and they asked how they could introduce their daughters to the sport.

The Henley Women’s Regatta welcome all spectators to come and experience this very friendly riverside event. The regatta start is at Temple Island and finishes at the Remenham Club. The regatta hub is halfway down the course where refreshments can be purchased, and car parking is available for a fee. These facilities are all kindly provided by the Copas Partnership. There are no entrance fees to the regatta and dress code is casual.