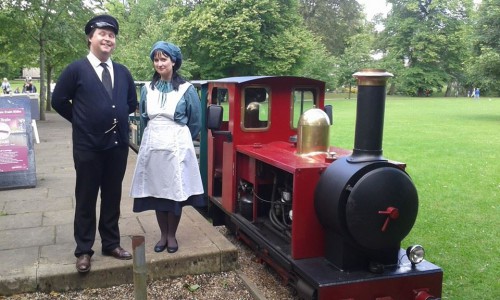 There’s still lots to see at the Henley Fringe this week, if you like drama how about going to see an adapted version of E. Nesbit’s Railway Children tonight (Wednesday 23 July) at 7pm at Hotel du Vin?

How can you present The Railway Children, with only one child? As a fan of the classic novel I was intrigued to see John Dunne’s unique adaptation. I’ll admit, I had doubts on how they could make the story work with just Bobbie as the main character, but I was pleasantly surprised! The story was cohesive, intelligent and highly entertaining… we were, on many occasions laughing out loud!

The play starts with a direct address from Roberta and through her narrative we soon learn that The Railway Children is being presented as a play within a play. This may sound confusing, but it works brilliantly – the characters even make light of the fact that it focuses on just one child, and they do so in good humour – adding to the entertainment factor. As the play only features four actors they have the difficult job of playing multiple characters, in a way that does not disrupt the flow of the performance or trouble the audience, yet they take on this task with great success.

What I loved most about the play was the actors themselves. Each one was focused, energetic, expressive and emotive, all of which really contributed to the engagement of the play – I was truly gripped throughout! Nicola Haldane portrayed Bobbie perfectly, a heartfelt and expressive performance that had a twist of humour to it too! Equally as impressive was Daniel Jeffrey, who played Mr Perks and the Stationmaster – his characterisation was superb. I truly loved his character, and so did the audience! He had us laughing one moment and then clapping the next. Getting the audience involved is something I really value when seeing a production and The Railway Children did not disappoint! Tamara Hall, who played the mother, was also brilliant – being expressive, humorous and emotive is a hard task but she did so naturally. Russell Kennedy who played Mr Szcepansky and The Old Gentlemen was also fantastic in his performance. It was such a pleasure to see these talented actors at work and I look forward to seeing more of the Crowd of 2 Theatre Company.

The Railway Children is a play that explores complex themes such as childhood naivety, innocence and family difficulties whilst keeping the charm of the novel. Engaging clever and unique, The Railway Children has it all! Don’t let the fact that there is only one child character in the play put you off, for it is this that makes this play what it is – original and entertaining. So, whether you love the novel or not, go and see this adaptation, you won’t regret it!

Other drama performances include Charles Dicken’s Ghost Stories also tonight between 9-10pm, An Extraordinary Light, A Moment in Time, Four Monologues or Hamlet.  For full details go to www.henleyfringe.org