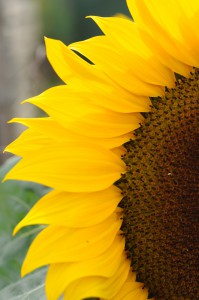 One of the great things about gardening is that there’s always something new to learn.  On an allotment we’re often learning from our neighbours.

After a couple of hours on my plot, I wander around to see what other people are growing and to have a chat.  One neighbour’s broad beans had the most beautiful purple flowers. Apparently, it’s Broad Bean ‘Crimson Flowered’ and it tastes as good as the flowers looked. Another veg to add to the wish list for next year!

It’s hard to believe that, until just over a year ago, the same neighbour’s bountiful plot was a tangle of brambles and weeds.  She covered the whole lot with layers of very thick cardboard and compost and then left it alone for a year.

Last summer she grew pumpkins on the top, but otherwise she didn’t attempt to grow anything until the toughest of tough weeds had gone.  Just goes to show that taking on an overgrown plot might be hard work and need a bit of patience, but it doesn’t have to be backbreaking.

Speaking of tough weeds, this is the time of year when bindweed is at its most terrible, or beautiful, depending on your viewpoint.  Yes, it does have pretty flowers but it is so tricky to get rid of. Adam Pasco has written a good blog about dealing with it on the Gardener’s World website. http://www.gardenersworld.com/blogs/gardeners-musings/dealing-with-bindweed/4890.html

Everyone tells me that they’ve had a bumper crop of summer fruiting raspberries this year.  As they come to an end, the autumn fruiting varieties are just getting going.  I planted a few canes of ‘Autumn Bliss’ in early spring.  They’re doing well.  Too young for a good harvest this year, but we’ll see what next year brings.

We’ve all been watering like mad during the hot weather. The sunflowers might be happy, but without good supplies of water the fruit producing plants (that includes peas and beans) won’t hold on to their fruit, if it develops at all.  Others, like spinach, lettuce, rocket and cauliflower will bolt (flower and produce their seed too early).

The best time to water is early morning and during the wonderful balmy evenings we’ve been having.  That’s when evaporation rates are at their lowest.  They’re such peaceful times to be outside.  It’s more of a treat than a chore.

Top tips from the allotments:

– lift shallots and garlic (if yours grew successfully this year!)
– Clear up around strawberry plants and encourage any runners to make new ones
– Finish digging up Early potatoes so that the ground can be used for planting out winter crops such as leeks
And an extra tip  – make sure you dig up every potato, even the tiniest.  If you don’t, they’ll reappear in the middle of whatever you have planted in their place.

The Henley Herald website provides an up-to-date and unbiased digital news service for
Henley-on-Thames
Does Your Child Love to Sing? New Youth Choir

Brakspear Pub Gardens Help to Save the Bee
Scroll to top