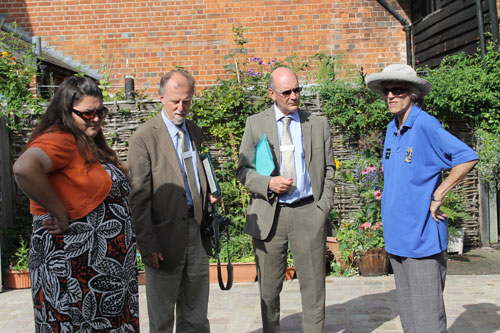 Henley looked golden in the sunshine today for the National judging of Britain in Bloom.  Jeff Bates, Vice Chair of the Britain in Bloom Judging Panel and Ian Beaney from Northern Ireland were the judges being shown around Henley today.  Ian was a previous competitor and its his first year as being a judge.

They started off the tour at Millenium Court, just off Market Place, nex to King’s Arms Barn, where they were shown the community garden and a display of 298 poppies which had been made by the children in Years 5 and 6 at 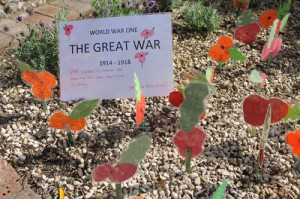 Trinity School to mark the number of Henley soldiers who lost their lives in World War 1.  Viv Greenwood, one of the Gardening Buddies came up with this idea and arranged it with the school.

The tour then went to Falaise Square, taking in the new Community Meadow on the old Blockbuster shop window. before embarking on the river part of the tour aboard the boat ‘Evie’ which was loaned by Hobbs of Henley and skippered by the brilliant Alex.

After the river trip, the judges met members of the Henley Wildlife Group on Marsh Meadows and then went on to the River and Rowing Museum where Helen Cook showed them Ratty’s Refuge – a garden pond area located beside the museum. The design is based on the Museum’s medal winning garden exhibited at the RHS Chelsea Flower Show 2008. 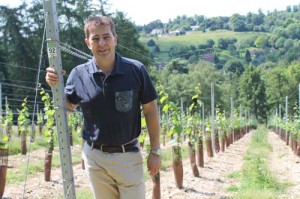 The judges also visited the Fairmile Vineyard, Trinity Church to see a wildflower garden and the Gainsborough Estate where the residents have done lots of Henley in Bloom projects.

The tour ended at the Bull on Bell Street pub and the Brakspear’s Bell Street Brewery for lunch where the judges were joined by special guests including the Mayor, Councillor Martin Akehurst.  Emma Sweet, Marketing Manager of Brakspear gave the party a surprise special treat after lunch by giving them a tour of the brewery where the special Henley in Bloom, Blooming Marvellous beer was brewed.

Kellie Hinton said afterwards, “I was very proud to show off Henley at its best, the town looked wonderful and the sunshine was the icing on the cake and brought out the beautiful colours.  Although this was a special day to highlight our best bits of Henley, the committee, park staff and volunteers work hard all year round to make our town what it is – it speaks for itself.   The judges were really complementary, however they don’t give too much away.”

Ian, the judge said after the lunch, “Before today, I have only been up the river to as far as Windsor, I certainly missed out on a gem in Henley.  Our ‘wow’ moments today were the river trip and the Fairmile Vineyard.  Your town really benefits from the Henley in Bloom work and the results are really tangible too for local busineseses.”

The results and awards for the national judging will be announced on the 16 October in Bristol.  Well done to everyone involved – lets hope we get a golden sunshine award this year.