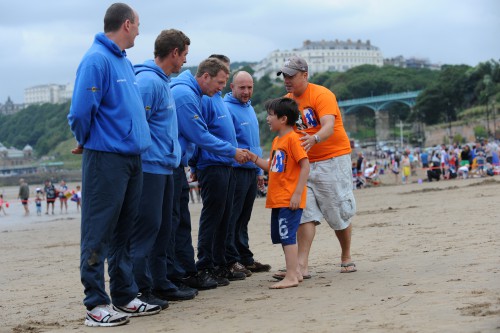 A parachute display team “dropped” in to see bereaved military families on Scarborough beach as the highlight of their week-long a Family Activity Break (FAB).

Will Harmer (7) from Henley was chosen to be FAB’s “inspecting officer” and greeted the formal line up of paratroopers.

21 families have been taking part in FAB run by the charity of the same name that provides breaks for families of bereaved service personnel.

Various watersports and horse riding were among the activities that occupied the parents and children during their week in Yorkshire. The arrival of Sky Dive GB – a freefall team of serving and former Army personnel – was the highlight of the break for the families from all over the country as well as hundreds of delighted holidaymakers. Led by Ray Armstrong, the team parachuted onto the beach with WO2 Paul Gibbs from 150 Transport Regiment landing trailing the Union flag as a finale.

“Scarborough and Whitby have given the families a huge welcome and they have benefited from the Heroes Welcome scheme,” said Lieutenant Colonel Belinda Forsythe, the project director.

“Both are forces friendly towns and their kindness and generosity towards our FAB families and indeed from people throughout Yorkshire, has been appreciated. We have really been spoilt with all kinds of things from rock to fish and chips and buckets and spades to event tickets under this scheme.

“We have had support today from the military family as well who have provided many activities and gone the extra mile. We are especially grateful to Sky Dive GB for dropping in and delighting young and old alike.

“The FAB week is a starting point for many of our families. It is a unique opportunity for these families to meet and support one another on the long journey back into normal life after their bereavement. They draw strength from others in the same position and It gives them the confidence to rebuild their lives.”

It was originally conceived in early 2008 and run as a highly successful pilot in the summer of 2009 where 24 families attended at two locations, Coverack in Cornwall and Whitby in North Yorkshire.

FAB is staffed by volunteers from the Armed Forces, Defence civilians and ex-Service personnel, helping as mentors, lending a helping hand or simply being someone to talk to.  They are all trained by a bereavement counselling service who specialise in supporting children and young adults facing bereavement. For more information about FAB log onto http://fabcamps.org.uk/