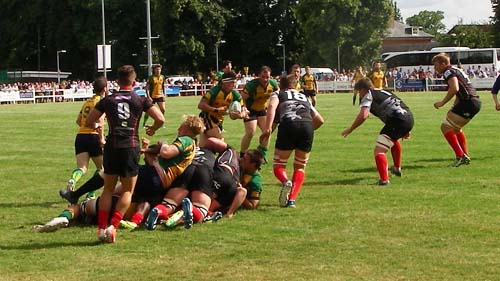 Henley Hawks maintained their winning start in Division 2 (South) with a bonus point 28-24 win over local rivals Chinnor at Dry Leas on Saturday.

The Hawks can continue to claim to be the top side in the county after a pulsating encounter, played in perfect conditions, whist Chinnor, who recruited widely in the summer, and came to Henley with high hopes, will rue indiscipline and an inability to cope with the Hawks fast expansive style of play in the first half.

Henley’s intent was made straight from the start when they demolished a Chinnor scrum just inside the visitor’s half where scrum half Connor Murphy picked up the loose ball and ran 30m to score. He was unable to convert from near the touchline.

Henley were a constant threat and attacked at every opportunity, making good use of the short side or spreading the play wide through open back play. Scrum half Murphy was at the centre of everything and he and outside half Ed Yarnton dominated proceedings.

After six minutes, following a line out, a great drive from Matt Payne allowed Murphy to feed centre Freddie Pierrepont who broke through the Chinnor defence. He put in a fine grubber kick but Murphy was just beaten to the touchdown by the Chinnor defence.

The Henley back row of Robbie Stapley, Tom Hall and Ryan Newman were outstanding. They dominated the breakdown area and carried the ball aggressively at every opportunity.

A high tackle on Hall by Chinnor second row Andrew Tibbatts allowed Murphy to kick a penalty after nine minutes to extend the home side’s lead.

Henley were playing with great tempo during the first period and the larger Chinnor pack struggled to contend with the pace of the Henley attacks with Ed Yarnton and Freddie Pierrepont a constant threat.

When the Hawks stole a line out after fifteen minutes, they almost scored a second try when Xavier Andre collected a great inside ball to break clear. He fed Tom Allen who was brought down just metres short of the line. Shortly afterwards, Murphy kicked his second penalty to give the home side an 11-0 advantage.

Chinnor rarely threatened but when they did, the home defence held firm with Matt Payne and Dave Clements leading the way.

Another break from Ed Yarnton put Chinnor on the back foot again, Tom Hall continued the drive forward and from the ensuing play, winger Owen Lloyd crossed for Henley’s second try which again went unconverted.

As a local derby, the game was fractious at times and Chinnor’s frustration showed on 36 minutes when number 8, Alfie Tooala Vaeluaga was shown a red card for punching following a good drive from the Henley pack.

The visitors had two failed penalty attempts in the first half to open their scoring but the Hawks went into the break with a 16-0 lead.

Chinnor outside half Ed Keohane opened the visitors account with a penalty shortly after the restart.

The Hawks responded quickly and extended their lead to 23-3 when the outstanding Tom Hall broke a number of tackles to crash over in front of ‘The Shed’. Connor Murphy added the conversion.

For the Hawks, the second half was a frustrating period. Although with an extra man for most of the second half, the home side struggled to manage the game effectively and often found themselves on the wrong side of many of the referee’s decisions. Also, the many substitutions that are now allowed meant that the Hawks couldn’t find any of the continuity that they showed during the first period and this allowed Chinnor to create more of a platform and get back into the game.

The visitors spurred themselves into action and started to exert plenty of pressure on the home side. Following a series of drives at the Henley line, Robbie Martey crashed over for a try which Keohane converted.

At this stage, Henley still had a potent attacking threat with Will Woodward and Tom West in particular driving well. However, the Hawks were constantly penalised at the breakdown just as a scoring opportunity arose.

With ten minutes to go, Henley number 8 Robbie Stapley eventually drove over for a try to ease the pressure and with a 28-10 lead it looked as if Chinnor would go home empty handed from their visit to Dry Leas.

However, the visitors had a good foot hold in the game by this stage and eventually, former Hawks captain Martin Nutt crossed for the visitor’s second try which Reece Boughton converted.

Although Chinnor never looked like winning the game, the Hawks again lost concentration to allow the visitors to claim a bonus point for themselves with the last play of the game. Reuban Haile crossed for Chinnor’s third try which was converted by Boughton.