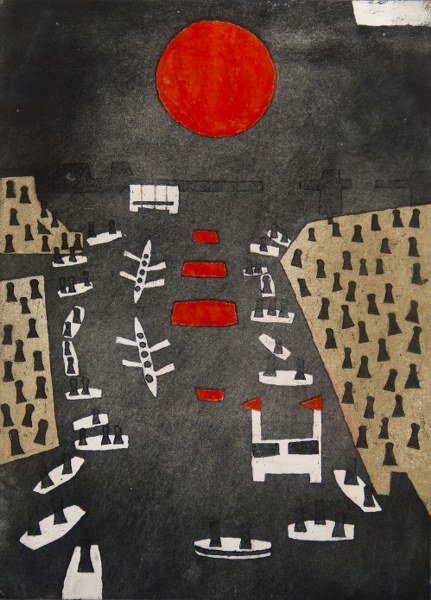 This remarkable exhibition spans the full fifty years of Julian Trevelyan’s print making career and highlights the extraordinary diversity and technical ability of this master printmaker. Recognised as one of the most prominent and influential printmakers of the twentieth century, Royal Academician Julian Trevelyan (1910 – 1988) was an important innovator of modern printing techniques. By the late 1950s he was Head of the Etching Department at the Royal College of Art where he taught and inspired, amongst others Norman Ackroyd, David Hockney and RB Kitaj. Ackroyd later wrote:

‘An enormous amount of work and desire goes into something so seemingly easy. I have, through my many years of teaching, often looked back and tried to analyse my time in Julian’s etching class at the RCA as a template for what can be achieved’ Norman Ackroyd CBE RA (Cat Rais p. 23)

Bohun Gallery’s exhibition highlights Trevelyan’s innovative approach to etching (he used lace curtains, hessian sacks and even fishnet tights to create patterned effects within his etchings) as well as the extraordinary breadth of his subject matter. A great traveller, Trevelyan’s response to some of the world’s greatest cities is presented including London, Paris, Florence and New York. No matter where his travels took him, he and his wife Mary Fedden always returned to their beloved Thames at Chiswick. The views up and down the river from his home at Durham Wharf, form the core of this varied collection. They show the daily comings and goings on the river, the swans, the gulls and the boats. The customs of the river Thames provided constant inspiration for the artist, articulated in his etchings of the ‘Building of the Thames Barrage’, ‘Pleasure Steamer’ and ‘Henley Regatta’.

‘Etching for me has always been a great love and I found that to be surrounded by Julian Trevelyan’s images was a magical experience which has not diminished with time. His work was unlike that of any other artist I knew. Full of ingenuity and insight, it had an unmistakable quirky humour …. I was enchanted’.

The exhibition presents over 40 etchings, beginning with his early surrealist period of the 1930s, and charts his progression through the 20th Century. The breadth and quality validates this 20th Century master’s artistic ambitions and presents a vibrant, colourful and exciting exhibition.