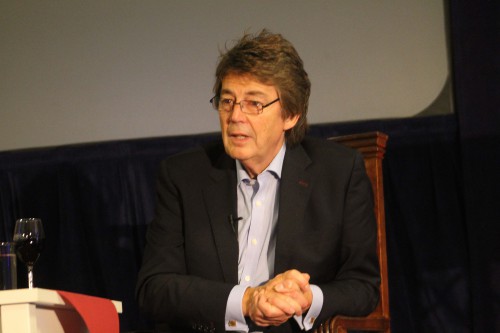 Mike Read seemed so at home on Saturday evening talking in his home town at the Literary Festival with Sue Cook. Mike who moved to Henley just two years ago was talking about his newly published autobiography, Seize the Day. His natural ease with the audience was shown at the start when his phone rang and he told the caller he was just doing his Henley Literary Festival talk!

Mike said he used his work diaries to trigger the memories to help him write his book. The writing came to a sudden halt though, after completing over 100,000 words, when his laptop was stolen and he to start all over again.

He really does ‘seize the day’. Mike loves the challenge of doing of lots of different things. From TV presenter, to musician, DJ and writer, to history and poetry lover he seems to embrace most things. However, the only thing he says he doesn’t like is dancing. His mother paid for lots of dancing lessons when he was a child and although he loved music from an early age he says he’s the worst dancer. He was really relieved when he danced with Princess Diana that she didn’t want to dance traditional steps with him. Sue then said, “You’re praying then for the call from Strictly!”

Mike then went on to talk about his I’m a Celebrity, Get me Out of Here experience in 2004 which he loved. However, having not flown for 10 years before though he wasn’t sure how we was going to get there – he was getting his agent to check out how to get to Australia by boat! Because this wasn’t an option, he then decided to enlist the help of his friend Paul McKenna. He’s not sure how he managed to achieve his calm state before flying by ‘doing an Elvis’ and chicken tapping on his nose but it worked! Mike said, “It’s a shame though that some of the really funny bits including when I got the celebrities acting out Oliver were edited out and I was shocked that Kerry Katona won as she passed out doing one of the trials with me and came round and said, “She’d like to suck her baby’s toes!”

Sue then asked Mike about his love of poetry and how he first got interested in it. He started off being fascinated by Rupert Brook and his modern ‘haircut’. Mike said, “I was intrigued by this man who was out of his time.” Mike founded the Rupert Brook Society in 1999. Mike went on to write music around poems and poets including the musical Oscar about Oscar Wilde. The Oscar musical however caused Mike’s ‘black hole’ in his life as he had invested his own money in it and the show closed after only 8 days. He was declared bankrupt and had to sell his precious record collection to pay everyone off. Mike told the audience though “I digitalized it before I sold it!

Before the audience question time Sue asked Mike why he hadn’t got married and his views on the Yewtree investigation. Mike said he hadn’t got married because he just hadn’t met the right person and it had to be right. He didn’t agree with his friend who once said, “If it doesn’t work out we can always get divorced!”

Mike couldn’t understand why he was asked about Jimmy Saville in the Yewtree investigation as he had never met him properly and he didn’t know he even had a family until he went to his funeral. He said, “None of the DJs or TV presenters really hung out with each other, we used to see each other once a year at the Christmas party. If you ask me, Jimmy was very clever, he used to make people feel special. He was very weird, eccentric with a massive ego.”

Mike enjoyed telling a few stories after being asked about the fun times he had at the Radio 1 roadshows. He said, “We wouldn’t be able to do half of those great fun things now.”

Having fun and seizing the day was definitely the message the audience left with.