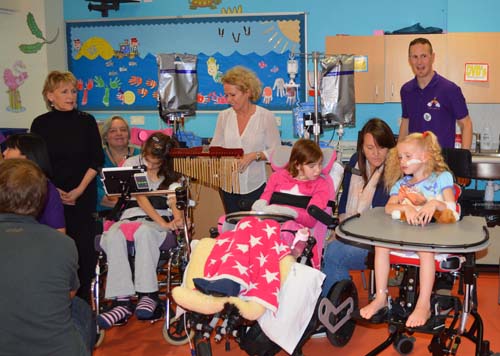 This year, on Tuesday, 2 December 2014, Rosie’s Rainbow Fund children’s charity is taking part in a campaign that it hopes will make history. They are celebrating a day dedicated to worldwide giving where charities, families and businesses will all come together for Giving Tuesday.

Rosie’s Rainbow Fund is planning a number of events around this date, and on Sunday 30 November between 2pm and 4pm the charity will be putting on a matinee production at the newly-refurbished Henley Town Hall called “Paint a Rainbow Live!” A highlight of the event will be the official UK launch of a special music video created in honour of Giving Tuesday to encourage worldwide charitable support. The music video features children from the USA, South Africa, local special-needs schools, Redroofs School for the Performing Arts, and children from the John Radcliffe Children’s Hospital Oxford singing “I Can Sing a Rainbow,” blending into “You Paint the Rainbow,” a song written by Rosie’s Rainbow Fund’s founder, Carolyn Mayling, whose late daughter, Rosie, was the inspiration for the charity. The charity will be posting the video to YouTube in the hopes that it will reach a worldwide audience and bring attention to the Giving Tuesday movement.

In addition to the unveiling of the music video, the matinee will also feature performances by children from the Redroofs School for the Performing Arts, children from the Henley Children’s Theatre Group, and choirs from Rupert House School. Several special guests will also be visiting and bringing some special treats for the children!

Admission is complimentary, but it is hoped that the audience will be generous with the collecting buckets, the raffle and purchasing the wide assortment of rainbow cakes, treats, tea, and coffee that will be available. CDs of the Redroofs Choir and DVD copies of the music video will also be offered for purchase. All funds raised will go directly to Rosie’s Rainbow Fund.

The event is timed not only to launch the music video, but also to coincide with Giving Tuesday to encourage people, charities and businesses around the world to help out a good cause. Whether it’s making a donation, volunteering your time or just spreading the word, Giving Tuesday is a call to action for everyone who wants to give something back.