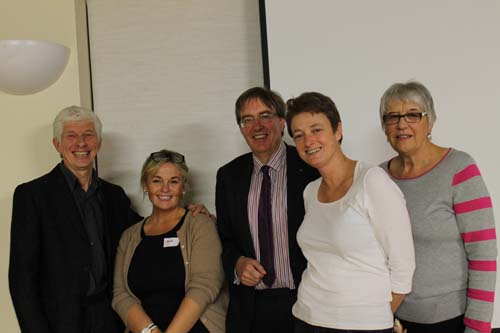 At the Henley YMCA AGM this week a large audience of residents, employees, trustees and special guests including John Howell, MP packed out the YMCA pavillion and were told about the fantastic work of the charity which was formed in Henley in 1857.  The evening was hosted by Angela Healey, CEO of Henley YMCA and including a number of presentations…

Sue Prior from Nomad Youth & Community Project spoke about the great partnership they have with Henley YMCA and their many joint projects which include football sessions, the Flying Frog, after school club and a community Fun Day in May.  She said, “We are looking forward to doing more together in the future.”

Neelam Rutti spoke about the new iniative called Katie’s Kitchen which takes place every Friday lunchtime.  Residents are invited to join Neelam to come and cook and share a lunch and chat.  The ingredients for the lunch are kindly provided by the local charity, the John Hodges Trust. 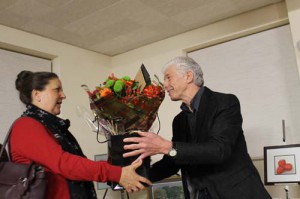 Mike Ray, ex CEO of Henley YMCA talked about the YMCA football teams.  He made a presentation of flowers to Gill Gardner for her fantastic support in bringing two of the founder team players, John Carrington and John Andrews to trainings and matches over a number of years.  Mike will continue to manage the YMCA Casuals which is a team for men aged 16 and over with a learning disability.  The team trains on the first Saturday of every month at the YMCA at 10.30am.

Councillor Kellie Hinton told her story of the fantastic support she received whilst living at Henley YMCA a few years ago.  She said, “I made some wrong 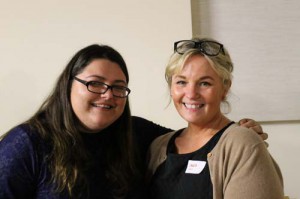 decisions in my life, the YMCA gave me emotional support, a happy, healthy and safe place to live.”  It gave me a platform, a place to grow and to go on to what I am doing now which includes being a a Henley Town Councillor and Chair of Henley in Bloom.”

Angela then invited four residents; Justin, Mary-Jane, Chelsea and Dee up to tell their very different and emotional stories about how they came to live at Henley YMCAA, the fantastic emotional support they had received to turn their lives around and that the YMCA provides ‘More than just a roof over our heads.’

At the end of the evening,Rosemary Duckett, Chair of the Trustees made the announcement about the future of the housing. “At the end of last year we heard from YMCA England that they are exiting their housing.”  Henley YMCA own the land at the Lawson Road complex but not the houses.  Rosemary then went on to say, “I’m afraid there’s going to be a big fund-raiser and that’s going to be our intention for next year.”

Angela said, “I think this will have a domino effect as Henley YMCA provide free facilities for a number of other local charities.  This is not just about us.  No one else offers these facilities and services in the area – we really are the ‘Jewel in the Crown’.  Young people really need somewhere to live and get support.  We have a special criteria which is to support the young people who have connection with Henley and the local area. We are awaiting confirmation of the valuation of the housing.”

John Howell, MP said afterwards, “I hope that Henley will support the YMCA as it tries to buy the buildings. It does a marvellous job for disadvantaged young people which deserves our support.”