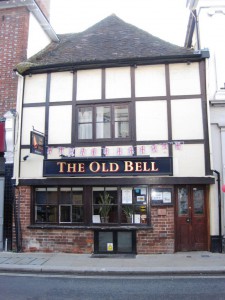 Despite the wintry weather, the Margaret Day Room was filled to capacity on Tuesday 3rd February by around 56 Group members and visitors for a talk by Ruth Gibson entitled “Henley and its Changing Relationship with the Thames”.

For centuries the Royal River was the principal artery for transporting heavy and bulky goods such as grain, timber and wool to fill the many demands of the rapidly growing capital. It was the M4 of its day, and like modern motorways, heavy use often led to delays. Barges had to share the river with mills and fisheries and as the millers usually controlled the flash locks there was often a conflict of interest. Already in Edward the Confessor’s time in 1065 there is a documented demand to remove the fish weirs from the Royal River; this is repeated in Magna Carta in 1215.

The river had only some 5 flash locks between Henley and London, but 20 between Henley and Oxford. This made Henley an attractive choice as an inland port, a place for collecting, storing, selling and shipping goods to London. The layout of Henley with its regular burgage plots along a wide, central market street and a stone bridge to allow goods from both sides of the river to be brought to the wharves, point to a royal foundation in the latter part of the C12th. At one time, Henley is reported to have contributed more annual tax than Oxford.

Ruth Gibson illustrated her talk with many pictures and drawings of the historic building of the town, which were involved in the developing trade such as merchants’ dwellings, storage buildings and inns to accommodate travellers, their horses and goods. The earliest structure in Henley is a surviving stone arch of the medieval bridge, now in use as part of the beer cellar of the “Angel on the Bridge” — yes it really did stand on the bridge originally. 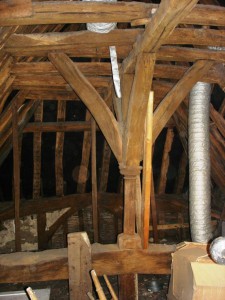 is the cross wing of what may have been the impressive house of a London grain merchant. Hidden is an elegant crown post supporting the substantial roof timbers that have been dated to 1325.

The warehouses that dominated the river frontage have mostly disappeared, but many 15th and 16th Century timber framed buildings survive, usually hidden behind brick or stucco facades, some subdivided into small cottages, others still in use as hostelries into the late 19thC, when the railway came and took over the transport of goods and people, and the river lost its uses as a carrier, for milling and fishing and became the much loved river of pleasure we know today.