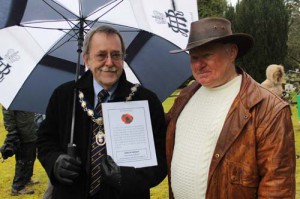 The meeting was well attended, with over 40 members present. John Keast was in the Chair. One guest (and potential member) was introduced. John Pragnall gave details of those members who have not been able to attend meetings recently, mainly due to ill health – sometimes of the member and otherwise of his wife.

The Treasurer, Barrie Fitton gave his report on the state of the Club’s funds, noting that the Charity Box total was well on the way towards the £600 that he hoped would be achieved by the time of the AGM in May. A list of possible recipient local charities  is being compiled, based on members’ recommendations. He reminded members that subscriptions would be due shortly and added his customary plea for more use of bankers’ standing orders.

Robin Rippon reported on the progress with planning of fresh events, requesting  suggestions from members. The programme of Club walks was reviewed. The next one, will be starting from the Mill Meadows Car Park at 1030am on Tuesday 24 February. The route will be along the river to Shiplake and back.

Tony Clark (Speakers’ Secretary) introduced the speaker, Mike Willoughby, whose subject was “Those Who Did Not Make It Back” – with reference to WWI.

Mike began by reminding members that he had spoken to them before. His interest in the subject had arisen out of his conversions with an aunt who had lived in Reading. This led to correspondence by e-mail with relatives in Canada; which focussed attention on a distant relative who had died on the Somme. His name was Arthur John King. Mike realised how little he knew about the man and decided to try to locate his grave. This proved difficult as the dead man was known as Jack and that was the name that appeared on the grave stone.

He than investigated the locations of the graves of those from his own village, then eight other local villages before tackling Henley, where he began some four years ago. There ars nine war memorials in Henley and there are many discrepancies between them. Some 70 names are missing from the memorial on the front of the Town Hall.

He also investigated the nineteen Commonwealth War Graves in All Souls churchyard. This brought him in touch with the vacar, Rev Duncan Carter, who had encouraged him and assisted him with his work.  In 2012 he organised a display at the Old Fire Station Gallery, which was visited ty the then Mayor, Liz Hodgkinson. She had given him great encouragement.

Over the past eighteen months, the scope of the project had extended. No two days  are the same and every day brings something new. He described the plaque now in the Town Hall, that lists all of the known servicemen of Henley who had died in WWI. The development of this had been the first phase of his project.

The second phase was the production of his book, with information on 298 men of Henley, plus some 200 more from local villages.

He reminded members that the War Memorial Hospital (now closed) had been funded by public subscription. Continuing, he described the ceremony at the Town Hall on 3 August 2014, when a plaque was unveiled by the Lord Lieutenant. Mike and his wife had presented a copy of his book to the Lord Lieutenant.

The proposal for a plaque of some sort, to go on each house where the dead servicemen had lived had run into difficulty, as individual planning permissions would be needed for each house. He mentioned the changes in house use and sanitary arrangements in the past 100 years.

He would like a permanent place where all the results of his researches could be held and speculated on the Old Fire Station Gallery, which he considered to be under used, as a possibility. He added that there were now 1640 names in total, with more being discovered.

He gave several examples of the information about individual dead service men that had come his way and showed photographs. He mentioned the memorial at Leander Club and the one at Westminster Bank, which is now back on display. He also showed a number of souvenirs that has been sent to him.

The Chairman invited questions. Replies included that the 1911 Census had been the basis of much of his work.He mentioned a display of photographs that had been held at the Old Fire Station Gallery. He said that there was one woman shown on the Post Office war memorial.

Mike was thanked by Malcolm Page and Mike was much applauded.

The Henley Men’s PROBUS Club meetis on the second Tuesday of the month at Badgemore Park Golf Club. For more information on PROBUS visit the blog www.henleyprobus.wordpress.com.