Shiplake College students from Years 12 and 13 took the opportunity this week to perform their examination pieces to a live audience, prior to the assessment. Year 12 took to the stage first, performing Alice Underground– a take on Alice in Wonderland, from the script by Chris Hampton. The expert set design left audience members wondering if they had indeed stumbled upon Wonderland! Having split the stage into 3 sections, the actors took the audience on a tour of Wonderland, expertly using a video camera to film live certain scenes, which were then projected onto the back wall for all the audience to see. This not only allowed the entire audience to see the action onstage, banishing the dreaded restricted viewing, but also had the added benefit of making all the actors appear larger than life, emphasising the nonsensical atmosphere that pervades Wonderland.

James Hargreaves took to the stage first, portraying the eminent Lewis Carroll. Rebecca Robinson graced the stage as Alice, giving a wonderful portrayal of the rather clueless girl, who falls down a rabbit hole and into a fantasy land. Anton Renouf expertly flitted between playing the Cheshire Cat, the White Knight and Humpy Dumpty, donning different costumes for the different characters. 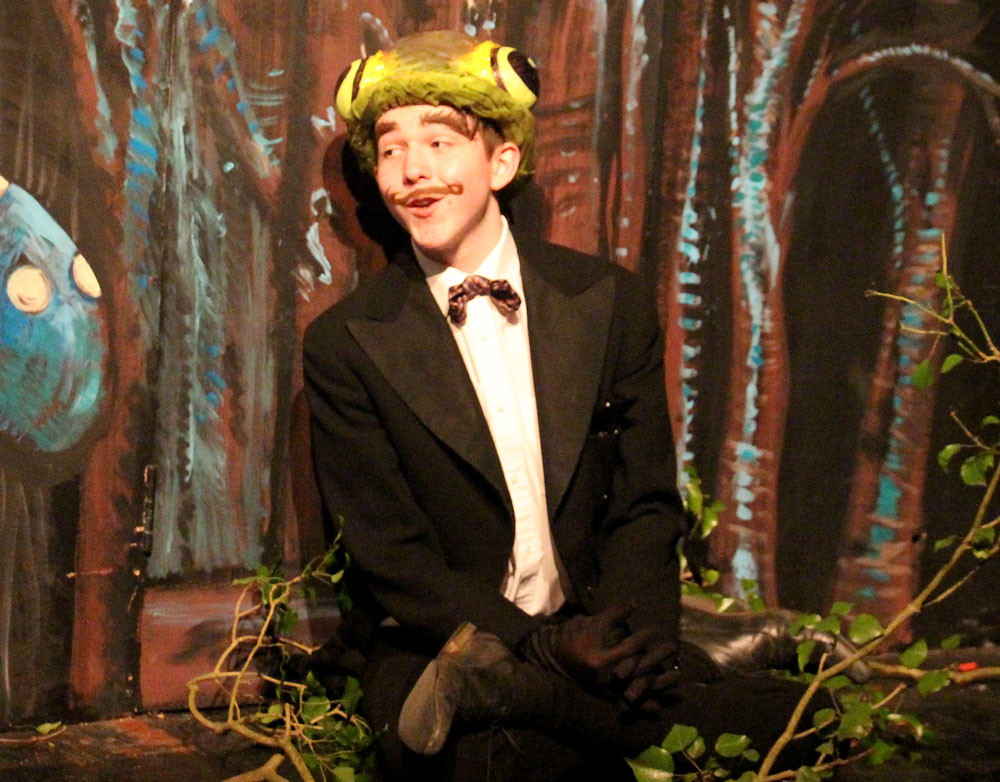 The Mad Hatters’ Tea Party was a particular highlight: with a raucous noise, the set was transformed into a manic tea party, starring James Hargreaves as the Mad Hatter, Harry Ibbitson as the Hare and Angus Meldrum as the Dormouse. Speaking to the camera, the tea party was at once played out in front of the audience and again from the screen at the back of the stage, adding to the absurdity of the spectacle.

The audience was then transported to the Red Queen’s palace, where Jordan Gibson gave a fantastic performance as the Queen herself, Harry Ibbitson as the Duchess (after a quick costume change) and Connor Cummings as the White Queen. The hilarious performances, clever costume design and phenomenal attention to detail in the set made this a real joy to watch.

Students from Year 13 were next to perform, taking the action away from comedy and madness, and beautifully tackling the very sombre subject of marital disharmony, in an original play called Unspoken. The stage had been split into 4 sections; a bed, a sofa, a table and a seat at the very front of the stage. The stark emptiness of the set reflected the subject matter; there was no comfort or distraction from the harsh realities of the struggling couples.

Albert Rydevik and Emily Holloway opened the play, with a skilfully performed contemporary dance. Ruaridh Sheppard gave a fantastic performance as an abusive husband, to Katie Webster as the frail and fragile wife. Luke Wilkinson was heart-wrenching as a widower, feeling utterly suffocated by his life. The actors made great use of the audience, speaking directly to them as though audience members were therapists, and the characters were answering their questions. A very consuming play, delicately intertwined with fragments of contemporary dance.

Have Your Say on Hospital Discharge – Important for Townlands Future ...
Scroll to top