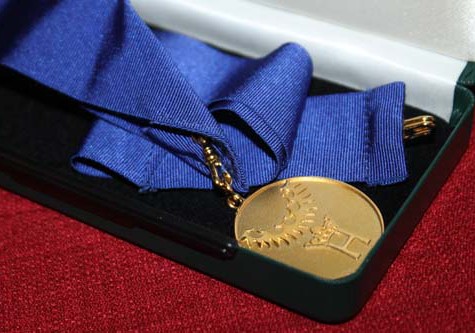 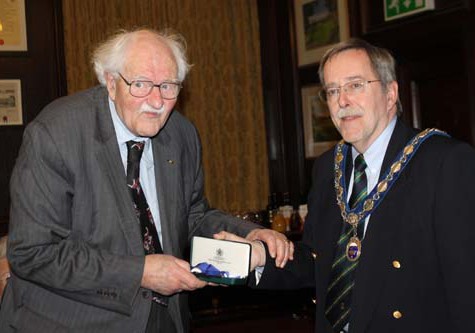 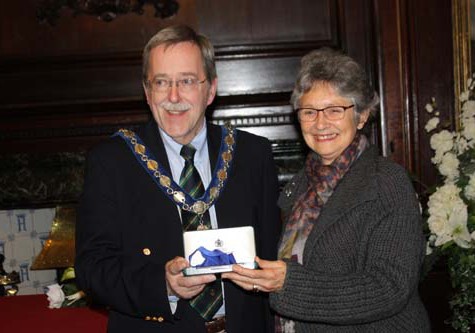 “Town Medals are awarded to people who roll up their sleeves, work tirelessly over the years and they are what make Henley so special”, said the Mayor, Councillor Martin Akehurst, opening his speech before the presentation of two Town Medals to Sally Rankin for her work with Henley Wildlife Group and George Leslie for his work with Henley Volunteer Bureau.

Sally, described herself 25 years ago as an ‘Amateur Botanist’ when she helped the Town Council with the conversation area around the River & Rowing Museum before it was built.  Mr Chris Bond from the Henley Wildlife Group spoke of her tireless work in setting up the conversation area around the museum and getting planning permission for small ponds to be dug there.  She has been Chair of the Henley Wildlife Group since 1993 and has been instrumental in driving the group and the initiatives which have included working parties, talks, surveys and the Nature Trail around Mill Meadows.  Sally also played a large part in the Meadows being awarded the Green Flag last year.  Chris said, “Sally has steered the Henley Wildlife Group very well for the last 22 years and the wildlife and people of Henley have benefitted from her work.  She’s a very worthy winner.”

After receiving her medal Sally said, “It’s a great honour to receive this award – I didn’t think this would go to wildlife! I would like to thank everybody who has helped me and contributed over the years.  I would particularly like to thank the Henley Wildlife Members and members of the Town Council – particularly Becky Walker, Gareth Bates (Parks Manager) and Chris Baldwin (Park Warden).”

George Leslie has been the Chair of the Henley Volunteer Bureau (HVB) for the last 23 years.  Councillor Jeni Wood spoke about George and the work of the Bureau.  She said, “George heads up a wonderful team of people who provide transport to help people get to their medical appointments as well as providing the transport for the elderly for the Mayor’s Christmas Party.”  George thanked Jeni for her kind words and said, “It’s been a real pleasure and an honour to chair the HVB.  I first came to Henley when I was in the RAF at Benson.  My wife Mildred had time on her hands and volunteered as a library assistant for the Town Council in the basement of the Town Hall where she met the ladies who first started the HVB.  After I retired she suggested that I volunteer as Chair to keep me out of mischief and I had an official interview before I was given the role!  Over the last 22 years it has have a privilege and pleasure to work and help so many people in the town.  Volunteering driving is very rewarding with a minimum commitment and we’re always looking for more drivers.”

The criteria for the Town Medal has been reworded to clarify the criteria which now includes that awards can be given posthumously up to 3 years after the death of an individual.  Nominations are now open until September 2015 for next year’s awards. If you know someone who is worthy of this award, please nominate them through one of the Town Councillors or through contact the Town Council offices.