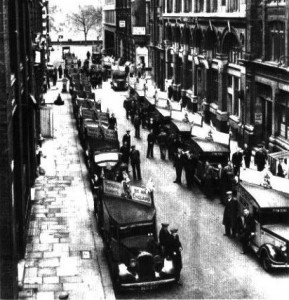 For the first time in its long history of monthly lectures in the Margaret Day Room of the King’s Arms Barn, the planned Henley-on Thames Archaeological and Historical Group talk on 7th April 2015 had to be cancelled at the eleventh hour. Sadly, David Moon was unable to deliver his lecture, entitled “The Prehistoric Guide to Oxfordshire.” However, John Whiting, a committee member, was able to step in and regale the audience with his memories of his time “in the print” in Fleet Street.

John’s father worked in Fleet Street after the war, and John followed in his footsteps, beginning a seven year apprenticeship as a stereotyper, starting at the very bottom rung of the ladder as a ‘dogsbody’ and moving through his indenture to become a master in his own right.

John talked us through the skilful and complicated process of stereotyping – reproducing printing plates from an original setup – and explained that once qualified, his specialism meant that he could be sent to any paper in Fleet Street. Some jobs in the print, however, were particularly lucrative as compositors were paid by the character (individual letters), which meant that as newspapers increased in size, so did the compositors income. Another fascinating insight was that when a position became available the method of interviewing was simply to put names in a hat, with the successful candidate’s name drawn at random.

The making of the plates for the newspapers was a dextrous and hazardous process, with molten metal being used, and it was considered a badge of honour to have burn marks – scarring that showed evidence of the spluttering liquefied solder. Another danger was the terrifically high temperature in which the printers were working – the constant revolutions of the huge rollers leaving an ‘ink mist’ under the giant reels of newsprint.

Working through the night was thirsty work and John recalled how the ink-stained printers would rub shoulders with the ‘toffs’ on their way back from London nightlife, in a “Mick’s Café”, as part of the Fleet Street tradition. Fleet Street and its long heritage may have gone, but the cafe remains.

John described the pressure in actually getting the paper out on time – how vans, like those in the illustration (Evening News vans decorated to celebrate VE Day, 1945) were revving up, ready to take the latest editions to waiting trains, to be delivered the next morning around London and the Home Counties.

Many people in the audience were of an age to remember the demise of the Fleet Street era, and how the names of Eddie Shah and Rupert Murdoch, among others, became synonymous with the ultimate change to the newspaper industry. In this turbulent time, John explained how he saw the advent of digital printing and how his reputation as a craftsman had diminished – and he moved on to another line of work.

From the Gutenberg press of 1455, through to the almost indecipherable newsprint of the 19th century, to the introduction of colour printing, it would seem that newspapers are undergoing another sea change with the advent of digital technology. Newspapers are rapidly being supplanted by their electronic successors, and the decline in sales of physical copies continues inexorably.

John’s talk concluded with time for questions and for an intriguing display of printing artefacts to handle. Considering that John stepped in at such short notice, it was an engrossing lecture and a fascinating insight into ‘a life in print’.
Viv Greenwood