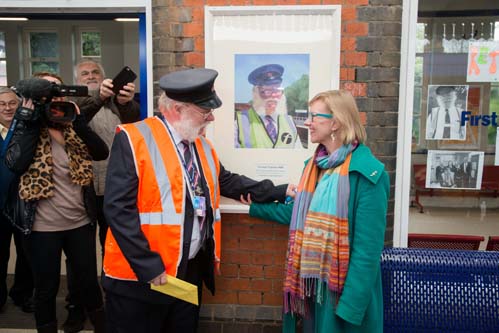 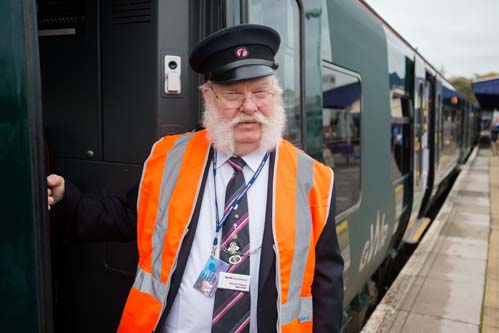 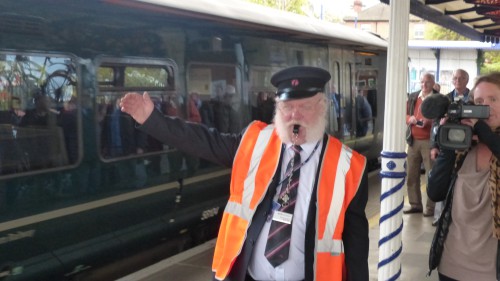 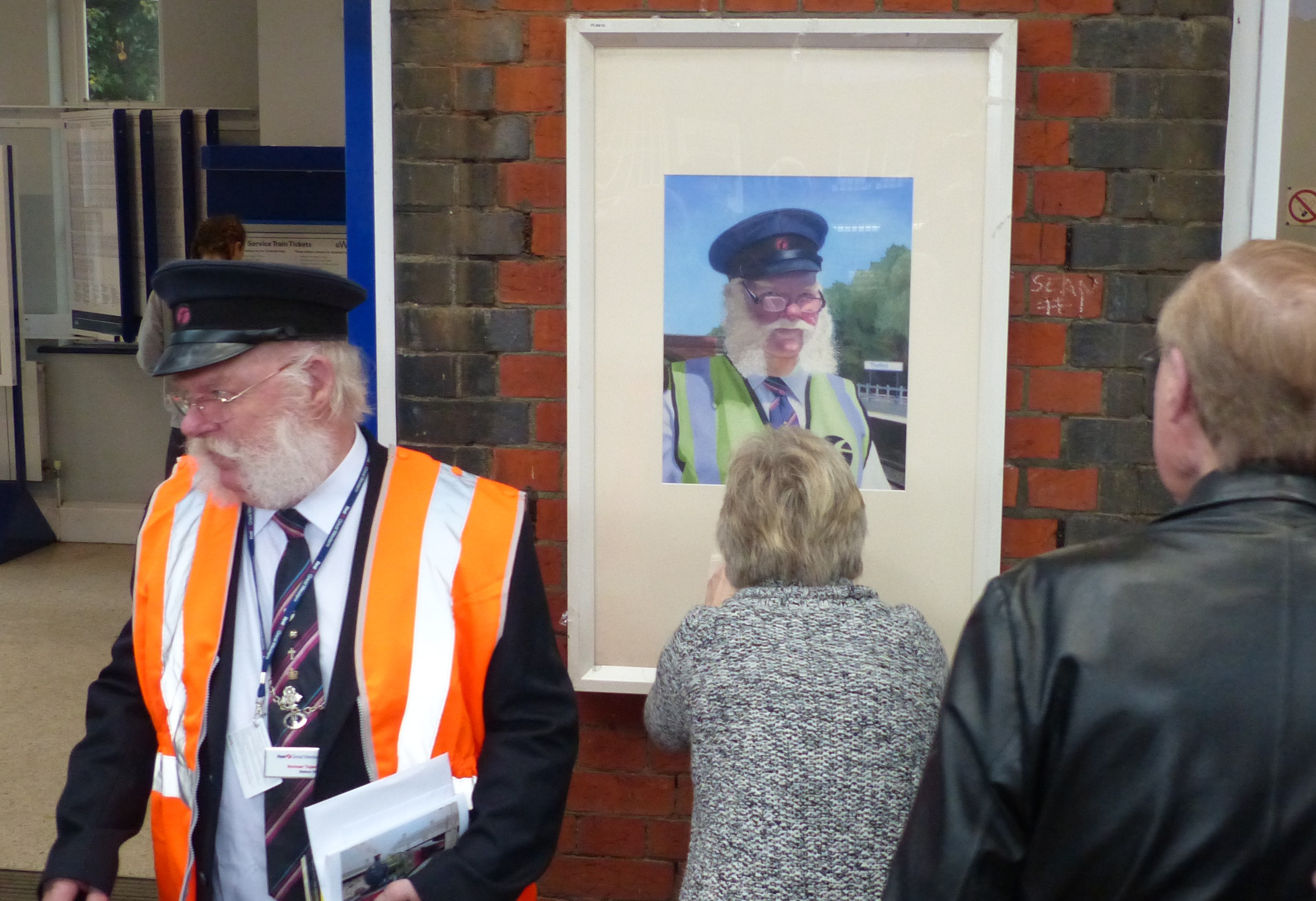 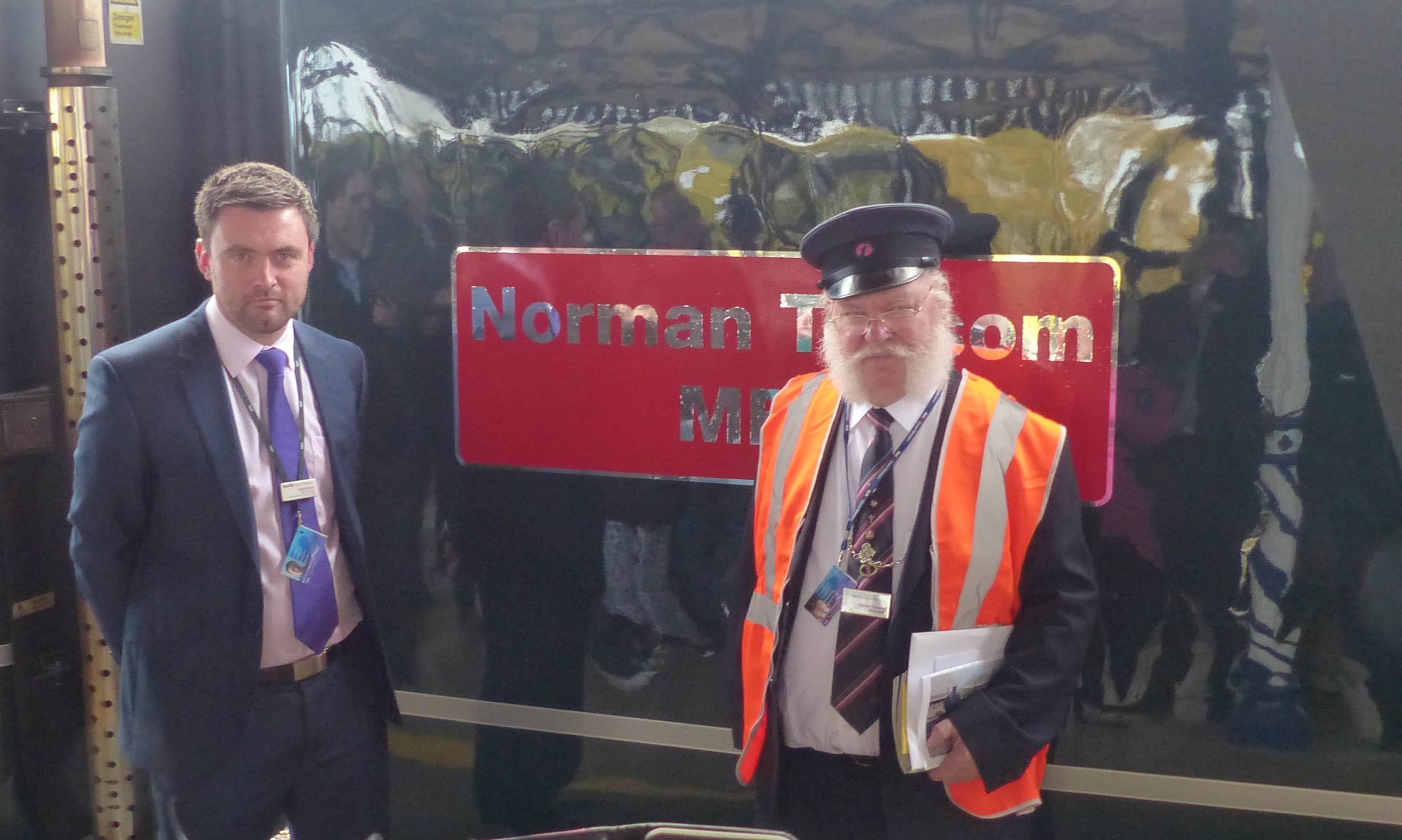 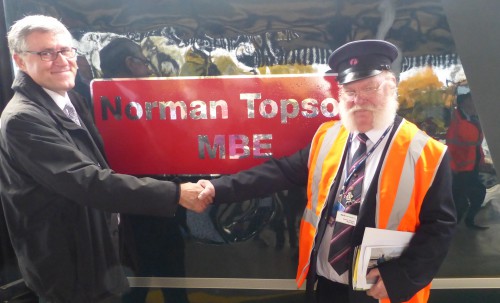 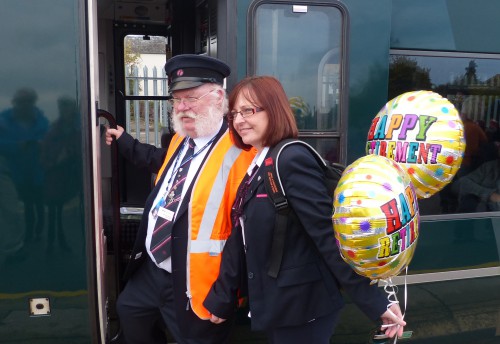 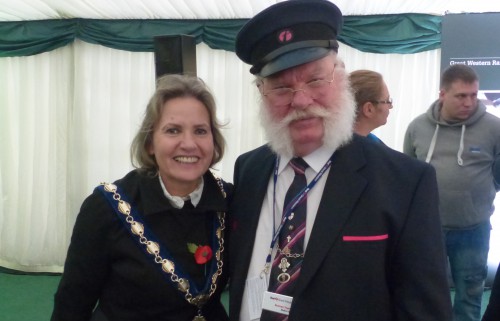 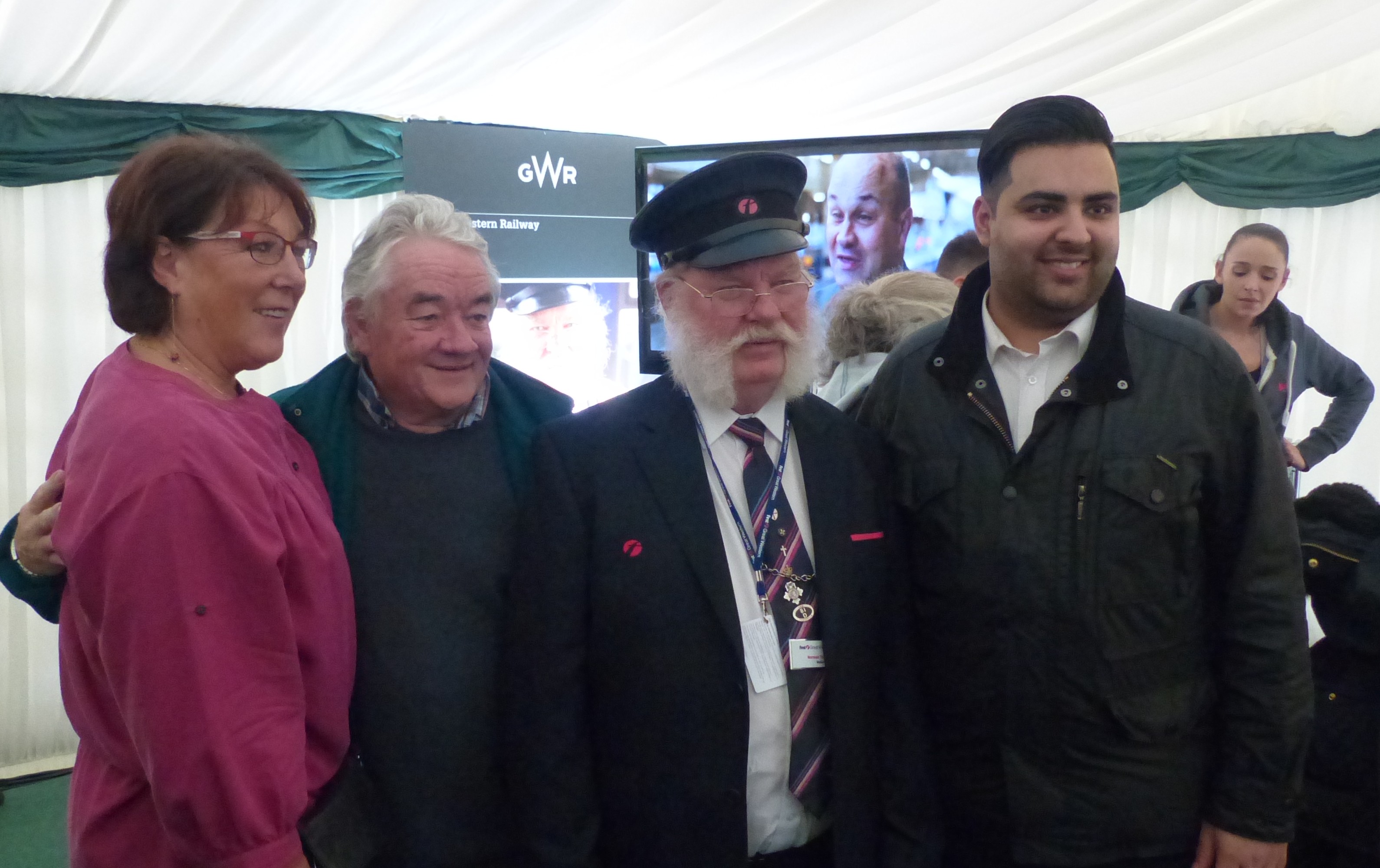 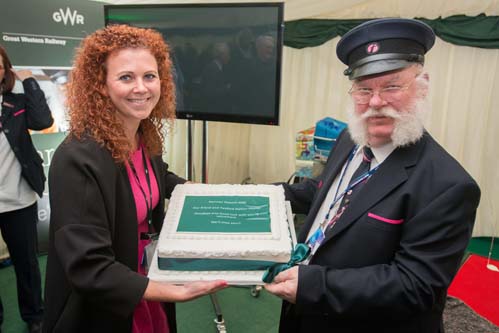 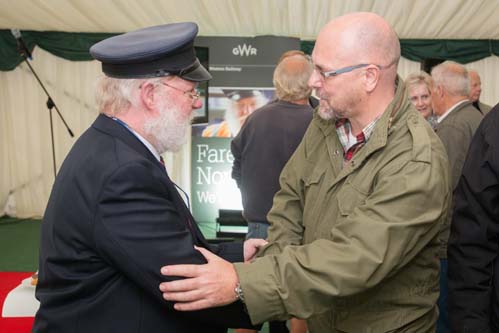 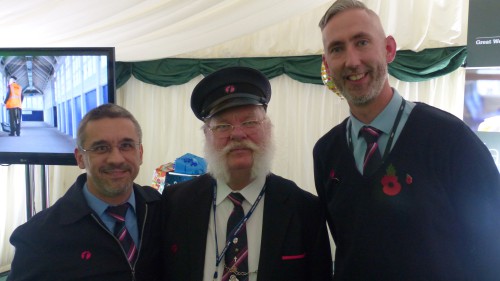 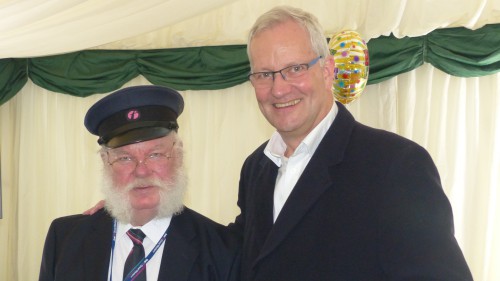 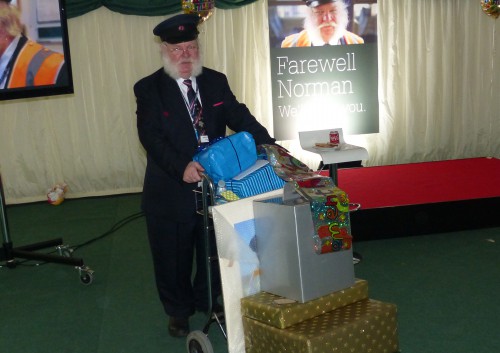 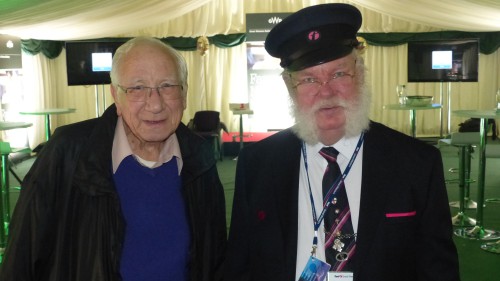 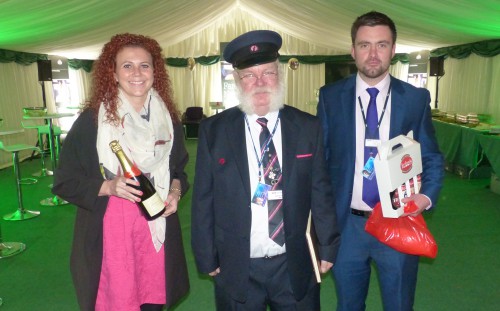 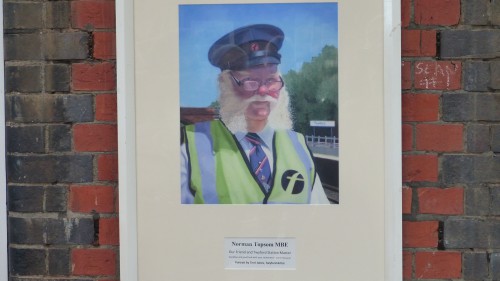 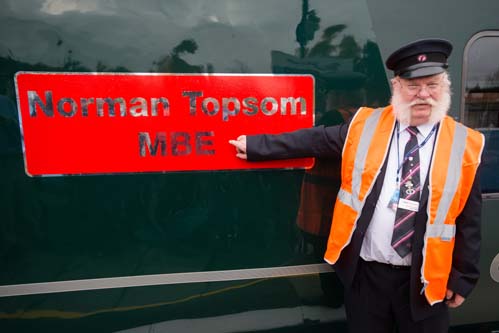 Norman Topsom, Twyford’s station master and the Face of Henley, retired after 53 years of service to the railway and our communities on Friday.  He was joined by friends and colleagues to wish him well in his retirement.  Henley Trains and the Henley Herald proudly present a record of the day with the photos above.

The afternoon started with the unveiling of a ‘Norman Topsom MBE’ named and freshly repainted train by Mark Hopwood, Managing Director of Greater Western Railways.  We asked Norman for his rea 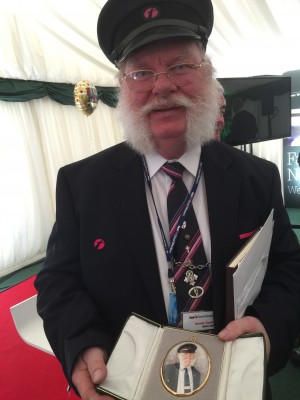 ction, he said, “It was a complete surprise although I had inkling that something was going on.  It has been a week of whispering and funny glances.”

A portrait of Norman was unveiled at Twyford Station and a miniature portrait (right) painting by local artist Bill Mundy was presented by Janette Vorster to Norman on behalf of all the commuters who had donated through a crowdfunding website.  Sue & David Goddard posted their thanks “What a legend! Thank you Norman for looking out for 4 generations of our family. You have taken such a pride in keeping Twyford station clean and tidy as well as the surrounding roads and the branch line stations. You will be sorely missed.”

We asked Norman what was his funniest moment in 53 years.  He said, “Probably in 1963 when I was fiddling with a door and I fell onto the track.  I always pushed barriers (no pun intended) – I never towed the corporate line!”

He continued, “I found many things over the years and I always challenged myself to get things back to people – I once sent something in the post back to New Zealand!”

Henley Trains presented Vicky Cropper, GWR’s events manager and David Pinder, GWR’s area manager , with small gifts of appreciation on behalf of all of us in the area for providing this lovely event for both colleagues and community. You’ll see Norman clutching a book filled with masses and masses of well wisher messages. Sorry to those who arrived later to find the event finished but I’m sure that you’ll understand that Norman’s energy ran out after such a special day.

Norman plans to take it easy now although he’s offered to train his successor and he plans to write about his time at Henley Station and the people who worked there.  He said, “I am going to wake up tomorrow and find that I am free man!”

Thank you everyone for joining in, from Neil Gunnell at Henley Trains (henleytrains@gmail.com) and the Henley Herald.

But mostly, Norman, thank YOU.

Henley on Halloween!
Scroll to top