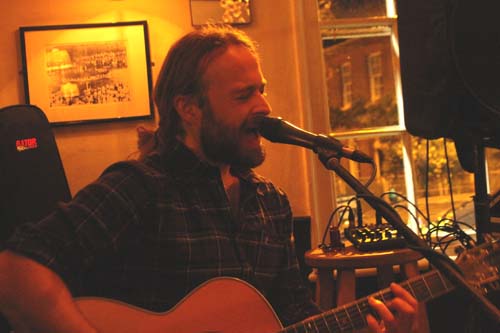 Tom Michell played an acoustic solo set at the Angel on the Bridge last Friday as part of the Brakspear Jazz and Blues Festival and as usual delivered some excellent rhythm’n’blues music to an appreciative audience.

Opening with a version of Bo Diddley’s Before You Accuse Me (although Eric Clapton’s acoustic MTV Unplugged recording is perhaps the best known version of the song), Tom quickly got into his groove and had the crowd tapping hands and feet along with the music. Covers of Stray Cat Strut, a bit “jazz-ish” according to Tom – but with a definite blues feel to it the way he played it – and some great guitar picking on Stevie Ray Vaughn’s Pride and Joy were warmly welcomed as the set got into its rhythm.

One difference this year from Tom’s previous appearances at the Festival is that he played some original songs from the recently released No Grudge EP that he recorded with his group, the Tom Michell Trio. After a strong rendition of The Thrill is Gone, popularised by BB King, the first of these was Back On The Ground, which he followed with a blues-y version of Depeche Mode’s Personal Jesus. Then Tom played another original, Tie Me Up, which has a great R&B groove to it and featured some 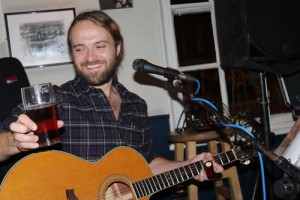 superb slide guitar. This song closed out the first half of the set, and by this time the room at the Angel was absolutely packed, and rapturous applause – and more than a few loud shouts of encouragement and delight – showed that Tom’s music was going down a storm.

The second half of the set, opening with Tom Waits’ Chocolate Jesus, again featured covers of blues classics and more material from the Trio’s EP. One standout from the latter was No Grudge, again highlighting Tom’s excellent slide guitar playing. Also off the EP were Am I Wrong, written by Keb Mo, which had a deep and dirty blues beat and the excellent Ain’t Going Nowhere, another superb R’n’B tune written by the Trio – and the best song on the EP with a great catchy chorus and addictive, driving guitar riff that I’ve been humming for days! – that was performed solo here by Tom with great passion and style. Cover versions in this half included Ray Charles’ I Got A Woman, Freddie King’s Big Legged Woman, a wild and boisterous Cream’s Crossroads plus a rousing Rock’n’Roll by Led Zeppelin that brought the show to a close.

Tom made many comments during the show about playing the EP’s songs without his band, and “giving it a go” to see if it worked – and it certainly did. One of the true tests of song writing pedigree is when a song is stripped back to its bones and played (often solo) in an ‘unplugged’ style. MTV Unplugged had music legends playing acoustically: some managed it much better than others, and in the process found new nuances and depth to old classics. For instance Eric Clapton rarely played Layla in its original form again after the reworked acoustic version he debuted on that iconic TV series.

All of the original songs that Tom played worked really well in a live setting and it’s a testament to Tom’s musicianship and the strength of those songs that they stood up and held their own against the blues classics he performed at the Angel. If he hadn’t said anything about their origin when introducing them, your reviewer would have been searching the web to find which obscure Mississippi Delta bluesman had written Ain’t Going Nowhere and the other titles off the EP.

Check out the EP, it’s a good introduction to Tom and the band, and see what the Tom Michell Trio are up to via their website. 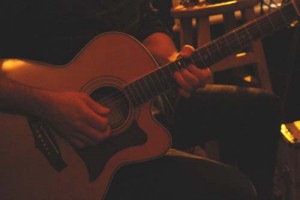