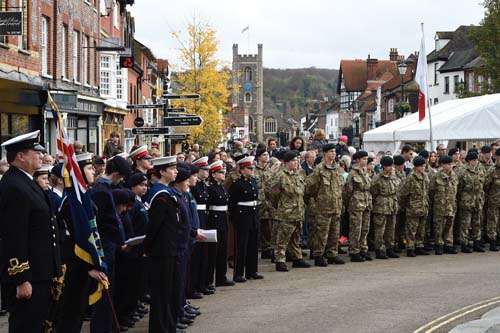 We are most grateful for the coverage you gave to events over the Remembrance period. Once again the people of Henley and area have been exceptionally generous in their support of the Poppy Appeal.

Our collection from all sources amounted to over £25,000. This money will make a real difference to the lives of members of the armed forces, veterans and their families through a wide range of practical help. For example giving advice to a young widow or providing dementia care for a veteran.

The appeal was launched by the Mayor Loraine Hillier with Sam Brown and her fabulous ukulele players who gave a hugely enjoyable concert in Market Place, a community event which typifies the Henley spirit! The following Saturday Mike Willoughby put on a fascinating display of his research into the local WW1 servicemen, part of the Lest We Forget project.       On Remembrance Saturday, despite terrible weather, the Military Vehicle Society and all three Cadet Corps helped with the collections. We are grateful to all of them for giving a huge amount of time and effort to supporting the Poppy Appeal.

We would especially like to thank Graham and Celia at the Bird in Hand pub for putting on fund raising events. We are grateful to all the Town Hall staff for their cheerful cooperation throughout and to Starbucks and M and Co cafe for sustaining our stalwart collector, Brian Hughes, with the occasional beverage!

We are indebted to Connie Butt for organising another highly successful dance in the Town Hall, to the Sound Force Big Band and their excellent music and to all who donated raffle prizes. The event raised 5000 pounds.

One of the most encouraging aspects of this year’s Appeal was the involvement of the young people. We wish to thank all the local schools for their enthusiastic involvement…Our special Kids Packs in the Primary schools proved popular and made a significant contribution to the Appeal. We were privileged to be involved in the event at Makins Recreation Ground on Armistice Day when local schools assembled a giant poppy which was photographed from the air by a drone.

It was heartening to see so many cadets, Scouts, Guides and Brownies participate in the Remembrance Sunday service and parade, after which a junior member of the Sea, Army and Airforce Cadets were each presented with a framed certificate of formal affiliation to our branch of the Royal British Legion by the Mayor. We look forward to closer ties in the future.

Our next event is the Living Advent Calendar at the Leander Club on Sat 5th December at 5.30pm. Do come and join us.