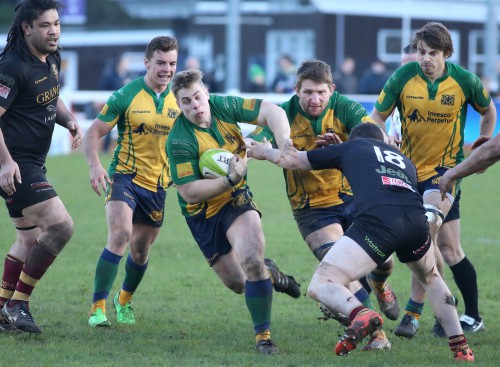 The Hawks continued to show improved all round form against what is considered one if not the strongest side in National 1.

The visitors field one of the biggest pack in the league and their physical superiority was the telling factor on the final result. This was given greater emphasis in the final quarter of the game when the Hawks were reduced to fourteen

The Hawks continued to show improved all round form against what is considered one if not the strongest side in National 1. The visitors field one of the biggest pack in the league and their physical superiority was the telling factor on the final result. This was given greater emphasis in the final quarter of the game when the Hawks were reduced to fourteen players.

Unfortunately the Hawks got off the on the wrong foot when Basil Strang’s kick-off drifted into touch. This gave Ampthill the opportunity to immediately establish themselves in and about the Hawks’22. They pressurised their defence which after six minutes conceded a try when centre Max Wilkins burst through from a handling movement to touch down which the Canadian international full back James Pritchard had no difficulty in converting to give his side a 7-0 lead.

The Hawks took the game into the Ampthill half in response. They were not overawed by the boisterous visitors pack and the hard working back row of Rob Bell, Oskar Hirskyj and the ubiquitous Tom Hall in particular were taking the game to the opposition .A move involving full back James Davies, Hall and scrum-half Tom Bliss took play to Ampthill’s ten metre area close to touch gave Bell the opportunity to force his way over for his sixth try in seven games

Strang was unable to convert from close to touch but was able to kick a penalty in the 21st minute from 40 metres to give the Hawks a one point lead at 8-7 The powerful boot of the fly-half was able to clear the Hawks’ lines when pressed . However after establishing themselves in Hawks’ territory and shunning the opportunity to increase their lead through the accuracy of Pritchard Ampthill retook the lead when they turned over Hawks’ ball at a line out and flanker Matt Burke touched down a converted try.

Immediately Strang kept Henley in touch with his second penalty so that the half-time break came with the Hawks down just three points at 14-11 and the prospect of a victory over certainly a side which appeared stronger than Blackheath whom they played last week and in second place in the league.

However the visitors were soon on the attack after the break and a threatening passing movement became a reality when the very versatile and powerful running prop Ralph Adams-Hale broke through what had been in the game a hard tackling defence to score a try which the reliable Pritchard converted to make the sore 21-11.

The Hawks generally had found it difficult to turn their hard earned possession in to points. However with four minutes they did create a scoring opportunity when they developed a handling movement down the left, after swerving run down the centre by Hirskyj- Douglas, to put wing Jake Randall away but when seemingly bound to be thrown into touch kicked ahead and beat the cover defence to touch down,]. With no conversion the score now stood in Ampthill’s favour 21-16.

Unfortunately the game then swung away from the Hawks in the last quarter when in attacking position the Hawks’ prop Dave Manning was given a yellow card for entering a ruck from the side a metre or two from their line. From then to the end of the game the Hawks were under the cosh from the big visitors pack apart from a 30 metre break by their industrious No.8 Hirskyj-Douglas .

The powerful Ampthill took advantage of a tiring depleted Hawks side. The first when an unprotected blind side led to a drive over the Hawks’ line by replacement flanker Sid Blackmore who made it a brace of such tries when touching down the final score in the last minutes of the game These scores sandwiched one by scrum-half Gavin Williams who finished off a break by Pritchard who collected a clearance kick by the Hawks deep in his own half with home defence wrong footed

The Hawks thus have suffered three defeats which could have well earned them bonus points. They have now slipped to the bottom of the league although they have a game in hand over Cinderford and Wharefedale who are their opponents away from home next Saturday!

Have Your Say – Neighbourhood Plan Referendum
Scroll to top