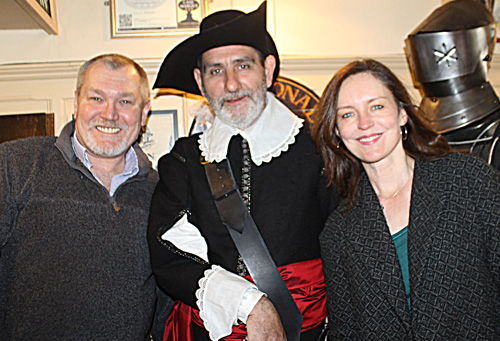 Councillor Dave Eggleton trialled his new Henley Civil War walking tour this week dressed in his Royal Cavalier finery to a bus tour group from Gloucestershire who were visiting Henley with the company, Great Days.

Trish Rae from Henley Tourist Information Centre said, “We started doing a few bus tours last year and we are looking to build on these.  Dave approached us and we thought it would be good to trial his tour out.  We’re always looking at different things and ways to attract visitors to the town.”

Henley has some great Civil War noteworthy events and sites. In January of 1643, after a skirmish taking place on the Mount over the Fairmile known as Roundhead Clump, the Parliamentarian army marched from Windsor in an effort to regain Henley from the Royalists. The Royalists had failed to fortify the town and upon seeing the approaching army abandoned Henley and headed for Reading, after first damaging the bridge which the Roundheads still managed to cross. A short time later Prince Rupert launched a counter attack from the direction of Reading. A Parliamentarian supporter had sent word of the attack so the Roundhead army under the command of Samuel Turner, were ready. Cannon were placed in Duck Street (Duke Street), Market Place and at the 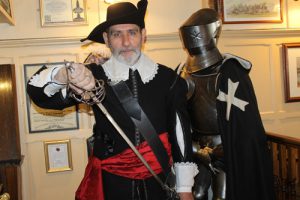 bridge. As Rupert and his men advanced they were cut down by cannon fire and retreated back to Reading.

Phyllis Court was fortified with 300 parliamentarian foot soldiers and a troop of horse who kept watch on Greenlands House, which were still held by the King’s men.

The group were greeted by Dave at the The Argyll pub in Market Place where they could enjoy a tea or coffee.  Landlord, Neil Ainsworth said, “We too are always looking at how we can expand our trade and attract new visitors.  There’s so much history in Henley – I think this is a great idea.”  The tour took in Duke Street, Friday Street, along the river and back up to Market Square.

Afterwards Dave said, “The tour went really went, we had some great feedback from the visitors and I am now looking at how I can plan future tours taking in the Civil War sites of Henley.”