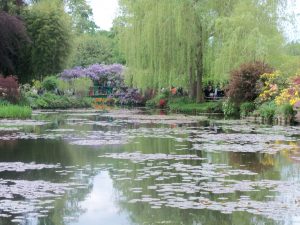 A party from Henley has returned from a long weekend with families in Falaise, on a visit arranged by the twinning committees of the two towns. The weather was great, not least providing warm sunshine for sitting on deck while cruising to and from Caen and enjoying the excellent catering of Brittany Ferries.

Visiting the town’s newly opened Civilians in Wartime Museum proved an emotional experience. This is the first museum of its type in the world, commemorating the 45 million civilians killed, and the 30 millions displaced, during the Second World War. Among much else of interest it provides a graphic reminder of the startling fact that there were more civilian deaths in that conflict than military victims.

Captions to the display are in English and German as well as French, and the Museum illustrates the considerable impact on civilian life during the German occupation as well as following the Allied invasion, inevitably involving physical destruction.

A Saturday evening reception and dinner for all involved took place in one of the village halls with which that locality seems well-supplied. This enjoyable event included musical entertainment provided by our hosts but more than amply complemented by the contributions of two talented ladies from Henley.

The following day the group visited Monet’s garden at Giverny, a magical experience in the best weather of the weekend. The universally known lily pond attracted most attention, but there is much of interest in the rest of the garden, the part which the painter worked with for longer.

Returning home, the group diverted via St Pierre sur Dives for a little light shopping in the very extensive market taking place there on that day, both within and around the massive mediaeval market hall. An almost infinite range of foodstuffs and delicacies, as one would expect, but also many other offerings, sometimes incongruous, from beds to broomsticks!

Getting off the coach in Henley at bedtime the verdict was that it had been a tiring but enjoyable expedition.

Have Your Say – EU Referendum: David Thomas and the EU Cookie Directi...
Scroll to top